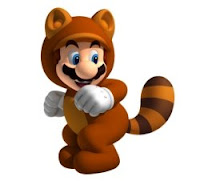 So, apparently, PETA issued a press release stating a complaint they have with Nintendo for their use of fur suits in their Mario video games, more specifically, the new Super Mario 3D Land for the 3DS which sees Mario wearing a Tanooki suit.  What the hell is a Tanooki, you ask?

If you Google the animal PETA is defending with its proper spelling, from one source you will find, “Definition for tanuki:  the raccoon dog, Nyctereutes procyonoides; the tanuki regarded as a shapeshifter, also renowned for its enormous scrotum.”
Wow!  Now, this is just from wiktionary.org and can not possibly be accurate, but if the animal is really renowned for qualities such as those, how could Nintendo NOT use it as a special suit?  Those powers seem all too perfect for Mario to utilize.  I haven’t played the game, but I imagine him in his little suit, shape shifting at will and gliding through the air, soaring high on the wind, lifted by his flapping scrotum.  I mean, if they went that route.  (Is it like a flying squirrel only nuttier?)
Anyway, I digress, if I even had a point at all, but the absurd thing is that PETA, claiming that this encourages the abuse of animals, has actually commissioned a parody of the game to be made called “Super Tanooki Skin 2D”.  WTF?  Apparently PETA also attacked the game Cooking Mama for not being vegetarian.  Really?  Kids can’t even pretend they’re making meals anymore unless they’re vegan?  No more plastic eggs or strips of bacon in kiddie kitchens.  Should the fake food all be replaced with fake tofu food?? (Is that redundant?)  I’m not making any cuts at vegetarians; people should be free to live the lifestyle they choose.  But when the majority of the world isn’t vegan, you might end up with a video game about cooking that uses dishes including meat, that’s all I’m saying.  What’s the real harm of this?
Well, I suppose that boys and girls could possibly grow up to wear fur, for one, and heaven forbid eat meat!  They are going to beg for Tanooki suits from their parents after the new Mario comes out!  You watch!  The world will eventually only be made up of meat eating Tanooki-wearing destroyers of furry animal life.  I get where you are going with this PETA, and we do need you to protest things, just to remind people to be compassionate toward the animals of the world, but you need to watch what you attack or you’re just going to look like a foolish entity!
Contrary to popular belief in today’s age, video games are not real!  (Sorry if I spoiled anything for anyone.)  If PETA hadn’t pointed it out, especially because of the change in spelling, you might not even be aware that a tanuki is a real animal!  Hell, they are “Asian raccoon dogs”.  Can’t say that I’ve ever seen one!  But I bet the makers of Nintendo have!    I mean, the other ones were based on frogs and raccoons and penguins, it makes sense to base it on something real-ish.  But if you look up “tanuki” it is also used to refer to the skin of the animal itself.  Uh oh.  That raises an interesting point, at the very least.  Get ‘em PETA!  Maybe that is why they chose to change the spelling of the suit creature anyway?  And what do they have to say for themselves?


"Mario often takes the appearance of certain animals and objects in his games.  These have included a frog, a penguin, a balloon and even a metallic version of himself. These lighthearted and whimsical transformations give Mario different abilities and make his games fun to play. The different forms that Mario takes make no statement beyond the games themselves." - Nintendo
DUH, PETA!  It’s lighthearted!  It’s MARIO!  He lives in a world full of mushrooms and clouds, even if he does have adventures to rescue kidnapped princesses.  He's more than that, PETA!  You just don't know!  But he's also Not.Real.  You need to learn to pick your battles, because if you aren’t careful, you’re going to end up looking quite ridiculous like the Westboro Baptist Church or something.  I get what you are doing, but really?  I doubt that the new Mario is going to make the sales of tanuki fur coats rise in the world.  Now, when Nintendo starts promoting sales of its game by selling kiddies real tanuki fur Mario suits, then I would release some statements and do some protesting.  Or when this new stylish suit Mario is sporting catches on with posh designers and it becomes world couture…then the world will definitely need your services to protect animal kind.  Until then, let it alone.
Use your money to support the Nyctereutes procyonoides in a positive way or something instead of attacking Nintendo.  Spread awareness, not complaints.  Find a way to give a raccoon dog back his pelt for real, instead of making a video game about it.  I guess you’re still raising funds from your video probably, I would imagine, but still.  Regardless of what the animal suit use in the games may or may not suggest, Mario also helps us to enjoy the different qualities of all of the animals depicted too, I assure you!  You enjoy being the animals, but if you have been correctly taught that video games are not real, you don't really want to wear an animal skin.  I'm not aware of a story where a child has skinned a raccoon or other animal, and worn its skin around their neighborhood.  (If I am wrong and you know of one, PLEASE point one out to me!)  I mean, after all, I’ve played Mario all of my life.  I love all of the critter suits, but I never wanted to run out and try to buy a frog suit or coat to wear or some frog skin boots…but I was a kid and I did think they were really awesome.  Hmm…good call, PETA.  Maybe you need to be absurd in order to get your point across.
[SOURCES:  http://games.yahoo.com/blogs/plugged-in/peta-slams-mario-over-fur-suit-211025773.html]
Posted By MISSIE SUE at 3:59 PM