Interferential Electro-Therapy might sound like something you would get if you were taken off by the white coats, but it's actually not as bad as it sounds.  It's really pretty awesome.  It's used as a therapeutic cure for pain and to aid in the healing of soft tissue.  The idea of being hooked up to electrodes might be a little intimidating, but it's actually pretty relaxing, once the tickle goes away.

I've been receiving therapy at the chiropractor off and on for roughly 4 years or so now.  We started out on my neck, because that was my problem area at the time.  This therapy is used to reduce swelling and aid in the relief from pain, promoting soft tissue healing. The low-frequency stimulation that is created prompts the body to secrete endorphins and other natural pain killers. Today, I get the electrodes simultaneously on my neck/shoulders and my lower back. I lay down on a table, they put four electrodes on each area, and then cover me up with hot towels. Yes...hot towels! It is heavenly. The degree of 'shock' is controlled and we generally stick to the setting I have been receiving. It is funny how when they gradually increase it to your level, it feels weird and almost 'too much' but I've found that this goes away after you adjust to it, so it's best to go higher than is necessarily 'comfortable'. It tickles for a bit, but by the time you are done with your fifteen minutes, you are in a sense numbed to the intensity of electricity flowing through your flesh.

I received Electro-Therapy originally on my neck to loosen up my muscles so I would pop more easily and my tense muscles would accept the adjustment better. It seems to have helped, but I have benefited much from going to the chiropractor in general. I received the therapy even when I was pregnant. Once I couldn't lay flat anymore they sat me up in a special chair. My chiropractor stopped with the therapy once I was so far along, though, lest it send me into early labor or something.

I went for an MRI my chiropractor ordered a year or two ago because I was experiencing numbness in my arms and legs at times. It turns out that, while also having arthritis in my lower back already in my early thirties, I actually have a bulged disc in my lower back. This will 'go out' at times, and also affects the surrounding area. She changed the way she aligned my pelvis because of this, and I don't have as many problems with it now, although, I carry myself and lift things in a way that I don't stress the area so bad. I think the bulged disc originated from either one of the multiple times I have fallen down a set of stairs in my life, or from a three-wheeler accident I had with my sister in high school. My lower back is the worst area in my body, though, so this more than likely occurred early on.

I had three different curves in my spine when I started receiving chiropractic care. I know that I wouldn't have been able to comfortably carry my daughter past my due date like I did without being aligned all throughout my pregnancy. I'm very grateful for what it has done for my body. Electro-Therapy is one of the best ways to loosen up tense muscles and it aids in easing them into holding their new positions. For someone with muscular or skeletal problems, fifteen minutes never felt so good. 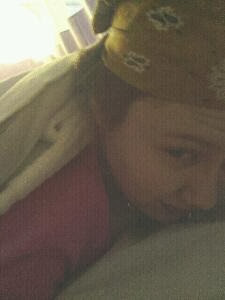