Give Me Some Sugar: Saturday Night on the Town

Truth be told, I had never been to Zeno's until last night.  Embarrassingly enough, I never made it into this local hotspot.  Heard great things.  Frequented by friends.  Never had the honor.  I had, however, seen Pure Cane Sugar @ Aldo's in Altoona for the Harlots and Halos Festival. At least, I saw a fraction of Pure Cane Sugar, they were completely acoustic and also without Molly, who was home with a sick baby that night.  Last night was a new experience as I was witness to the full sound of the band and the tremendous vibration of the three part harmonies those lovely ladies make.  A mighty chord was struck as I saw Pure Cane Sugar perform in all of their harmonious glory at Zenos.

We lucked into a table up front thanks to the determined efforts of my girl, Melissa! We got ourselves a pitcher and prepared ourselves as the band set up. It was a full house on this night and the ladies were fantastic. They opened, to my delight, with a beautiful rendition of Bob Dylan's A Hard Rain. Kate comes out ready for the show. They share verses, each one bringing her own timber and shine, working their way through the cerebral tale of a song. What an epic way to open! Throughout the night we enjoyed many of their originals which induced bopping and dancing; it became contagious. They have an impressive selection of covers they play and excellent musical taste, bringing their own jolly rock to everything they do. We heard covers of Bruce Springsteen's I'm on Fire, Big Hard World by Eddie Vedder, Come Together by the Beatles. They played Old Man and Southern Man, which I heard at Aldo's, but were so much fuller with Molly's vocals and the backing band this time.

Molly beat on the bongos in perfect rhythm. Natalie crooned out her sultry sound while working a tambourine like a pro. Kate's ferociously fast on acoustic guitar, switching between her 12 string and 6. On this night, they were backed by a lead guitarist, bassist, and drummer. It was interesting to see them initially without the full band so I had the ability to compare. I was ecstatic to hear Mr. Soul this time!!! They also did a solid performance of Dolly Parton's Jolene and a great take of The Civil Wars' Barton Holler. Excellent taste in music! 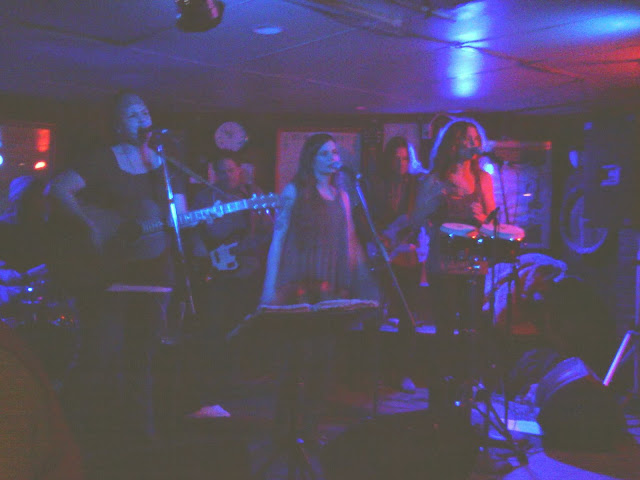 Kate is impressive on acoustic guitar; her pocket is flawless. Molly is a sight on the bongos, wildly drumming, her hair flying as she is lost in the rhythm. Natalie is like a beautiful gypsy, singing and dancing. It's impressive when people can create such a signature sound from their harmonies the way that Pure Cane Sugar can do. Nuances are incredibly important and there is something to be said about a good harmony backing or shaker. I haven't seen such rhythmic tambourine and phenomenal femininity since I saw Steve Nicks in 2012. These local girls rock. Pure Cane Sugar, every Saturday at Zenos bar. It's a time!