Counting on Numbers: Do you see the signs?

Do you ever see a certain number start to pop up and then that number will haunt you progressively over time?  You see it on receipts, every time you seem to glance at the clock, it jumps out at you from billboards, addresses, totals, and so on...and so forth.  I see so many numbers pop out at me I feel like I am carrying on an ongoing conversation with the Universe.  Last year I got really into numerology after having been catching triple digits daily ever since the fall of 2010.  I believe that the world is alive and is constantly "talking" to you, but the thing is you and the world are kind of like twins or lovers, in that you have your own unique language or means of communication.  Some things stand out to you, or speak to your soul.  Whatever this thing is, if this is what gets your attention then HERE'S YOUR SIGN.  Carl Jung called these things that catch your eyes "synchronicity".  My grandmother called them "God-incidences", as in coincidences from God.  Basically, the same thing, right? Semantics.   Whatever name you call it, it's what I believe. Numbers are what stands out to me and that's where I am given some of my wildest synchronicities.

As I said, I started seeing triple digits regularly in 2010.  The very first one that I remember seeing daily was 4:44 and this wasn't even reserved to once a day, as I would catch it often while up nursing my daughter.  What was interesting was the time frame that it started.  I was pretty emotionally exhausted and physically fatigued, floating head down in Life and Death soup.  It started happening enough that I took note.  It started happening enough that it was weird and was one...strange...coincidence.

I started seeing different triples. 3:33 came next, and 2:22, 5:55. You name it, I've probably seen it. Sometimes I see 909, or 919. I was chased by 11:11 for a good number of months. 10:10, 12:12...all different clocks, all different places. Different thoughts. Different instances when they were right there. Pull into the driveway as a song plays, coincidentally come to a stop right as it ends and the clock reads 5:55. Speak a life affirming line to yourself, turn to the clock and it's 11:11. Sure, it IS just a coincidence, but when things happen like this to you TOO often it's hard not to feel the movements, let alone BELIEVE in this divine dance that seems to be taking place. It's just too hard not to...because by this point, as you turn and face the clock and it reads a triple, or repeat pattern, or what have you at a revealing time...you start to say "Of COURSE it is. Of course!!" Maybe it in effect IS because you expect it, but how can your internal clock know when to look at every clock around you, not just your watch that it could sync itself up with? Because you may be expecting it, but you aren't looking for it or waiting for it...there is a difference. This is a clue...a clue that shows how every minute, every thread in the fabric of time is connected.

There are some beliefs in numerology as to what each number pattern means, but how can we even know that? The truth is we don't know jack shit. The only truth is our personal truth and that is our own perspective, it's subjective, which, basically, to quote The Dude, is "just, like, your opinion, man!" If it's true to me, it's real. Well, if it's true to you, isn't it real? I am never on time but I have a great relationship with the clock. It's just my Synchronicity Station. Maybe I set myself up to see them, but then why do the patterns randomly change? I do still see triple digits probably at least once a day on average I'd say, but I am haunted by the 44 as of late!! Probably around 75% of the time I look at the clock it's a 44, as in 5:44, 7:44, 11:44...and so on and so forth. Today, for instance, on top of seeing at least two or more :44's, I witnessed 4:44 and 5:55, on different clocks (SIDENOTE: just NOW,while writing this looked up and saw 12:44...that's what I'm talking about.) It's uncanny. It might seem ridiculous but I can't help how many times I see numbers. I find it the most humorous when I glance at the clock and catch one JUST as it switches. It's easy to write it off as the crazy following of coincidences, but when it happens to you and seems to be responding to your own thoughts and changes your relationship with yourself and your view of your personal Universe, you'll know it.

So, every day coincidentally I see something. I expect it, maybe at times, but I don't sit and wait and watch for it. I look at the clock throughout the day, but I don't do it obsessively or more so than I'd say the normal person does. I'm not on a 'schedule' of any kind, so there is no reason for me to check overly often. It doesn't even have to be a found on clock, though...it could be page numbers, temperatures, addresses, receipts, amounts, etc., ETC.! Most times it is when rising and walking into another room, glancing at the clock as I go by. BAM! Or coming in the door or taking my leave, or finishing something up, or beginning something, you glance at the clock while on your way through...and there's your sign. And eventually you begin to count on numbers because their presence is reassuring to you. So what does it all mean?? 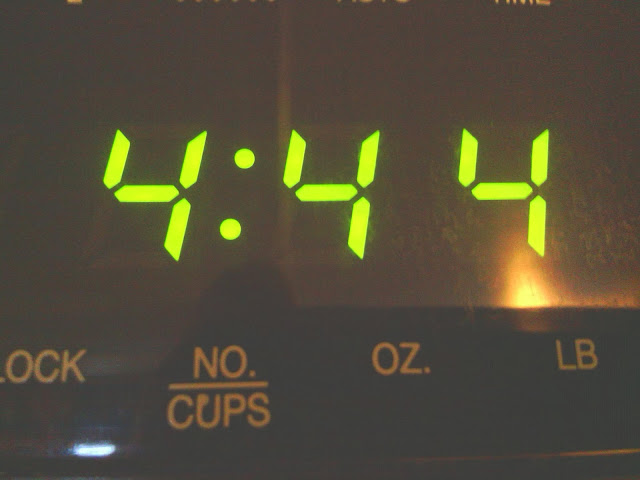 I have talked to people that have also experienced the triple digit phenomenon, and while most people will have caught a few of them in their lives and noted the mighty 11:11 on occasions, you know when someone has systematically been chased by numbers too. They get goosebumps when you tell them about your stories...because it gets to the point that it's like seeing a ghost. Because of WHEN it happens. And this When might only be aligned with your own personal inner dialogue, but that is what MAKES the coincidence. It's when the sign itself, while in and of itself is an exciting phenomena, leads you to a decision or choice because of its precise whereabouts on the fabric of time. Sometimes you just have to say "WHAT are the fucking odds??" And eventually if you say that to yourself enough times you realize that even if you are only communicating with yourself, some kind on guidance or gift or leading is being done. It becomes the dangling carrot. And while you still utilize your masterful mind of logic to lead your life, sometimes....sometimes....you just need to follow the signs.

Email ThisBlogThis!Share to TwitterShare to FacebookShare to Pinterest
Labels: Choices, Life, Synchronicity, The Self, The Universe