I have been meaning to finish up so many writing 'projects' for the longest time but I just haven't been feeling it.  Scrawled words emerge from time to time on random substrates, but I have been distanced from my writer's mind for some time.  Well, not the mind, just the motion.  Lines pop into my head as usual, but I don't grab a pen.  I let them fall to the bottom of my mind, and figure if the words were that good...they would come back to me.  Some do, some don't. That's the funny thing about words.

I like to have my trusty Moleskine with me, and it is usually in my purse, but I've been using it only for concert noting on the go, as of late.  I've been lost in thought instead of words.  The truth is I have dozens of journals and notebooks...aching for words.  Blank pages scream at me from every corner of my space, but I have not felt compelled to touch them.  I've been lost in instruments more so, but have been lax with that as well, until last week when I was compelled to pick up my Alvarez for three days straight.  Being compelled is another funny thing.  It's almost like a program in your brain you have to follow; you are driven to carry out the mission.  I just didn't seem to want to do anything else, so I just went with it...and let the housework back up.  My bathroom paid, but I was rewarded.  It lasted three straight days and then waned.  It felt good.  Sometimes, I am just compelled to do things and it feels best to just go with it.

So, today while I was in the store for a few things, I was compelled to buy a notebook and pens.  Stationery.  It should be known that I have a thing for stationery; I'm drawn to it like a moth to a flame.  I wander away from my husband at the site of the paper aisle in a store.  I am ridiculous in Staples.  It's borderline fetish.  Okay, I don't feverishly rub composition books on my genitals, or anything, (although if it was a leather bound journal, now...) there is just nothing like a fresh tablet and brand new pens! So, even though I know I have plenty of notebooks of every size and color, I for some reason felt I needed to purchase a small 3 subject Mead notebook and a pack of pens that claimed they were 'The smoothest in the world!'  The Bic Velocity. Good pen.  Smooth.

I felt compelled and went with it and got the tablet and pens.  If my Self says she wants a tablet on a whim, then what does that say?  What deeper tells does my spirit show?  Perhaps that she is ready to write again.  Perhaps that she wants new paper...for her new words.  Or...perhaps she is just a fetishist after all.  Let's see what she is compelled to do with it. 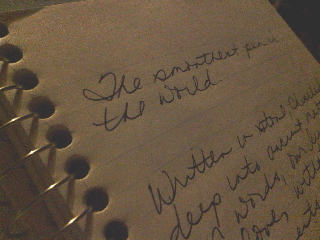 Email ThisBlogThis!Share to TwitterShare to FacebookShare to Pinterest
Labels: Compulsions, Habits, Personal Growth, Renaissance, Self Love, The Self, Writing