This experience was on the list of those that I refer to as bucket list epic, being such an honor to see a revered artist this up close and personal.  It was somewhat reminiscent of my Neil Young experience, although NOWHERE near as phenomenal (I mean, come on, we're talking about eye contact with Neil Young!)  They certainly proved that they can still put on one hell of a show, and are, in essence, still the same!

There was an opening act that were locals from Pennsylvania called the Badlees.  They were a 6 member piece with 2 guitars, a mandolin, etc.  There was a guy that was amazing on the electric fiddle and had a great solo.  There was a playful pissing contest between the two guitarists.  Overall, they were quite good.

Soon out came the timpani and saxes as the Silver Bullet stage was set up.  We had incredibly good seats for this show, floor level, on the right side of the stage.  There were SO many horns!  I was seated next to a gentleman I ended up talking to throughout the show.  He had seen Bob Seger around 15 times or so at this point, the first time being in 1977, so it was interesting to hear his reflections on past and present performances.  He said that in the 70's it seemed you were either into Bruce Springsteen or Bob Seger, and he was always on the Seger side.  He loves how he 'paints a picture with his words'.  I had just seen Fleetwood Mac in Pittsburgh a week or so prior to the Seger concert and we discovered he was there as well!  Small world!  He had seen them about a dozen times before and we both agreed that seeing them leaves no doubt to be had about Buckingham's prowess on the guitar and his sheer talent.  He said out of all of the shows, it was the BEST!  I was obviously glad to have experienced it even more if that were possible.  It was good to know that it wasn't just my biased opinion, also, because I had nothing to compare them to other than Stevie Nicks, but I thought they were absolutely magnificent!  I digress...

The Silver Bullet Band brought it like nobody's business.  It was everything you'd want in a show.  They played a decent set list, leaving out Still the Same, which I had hoped for, but still you couldn't even be upset about it.  Fire Down Below, Main Street, Old Time Rock and Roll dedicated to the college boys, Her Strut, Come To Papa, with Alto on timpani, etc etc!  The man next to me said it was a bit shorter than other shows, but was great considering he also threw in Come to Papa, which he doesn't do as often.  I maintained my composure until he started into Like a Rock, and the vapors came and I teared up.  It wasn't the one that I thought would 'break the seal', but it's just SUCH a damn good song!  By the time he sat at the piano for some songs and started into We've Got Tonight, I was almost sobbing and by the end I believe I briefly bawled.  Beautiful.  I was eventually moved beyond tears, to an inner realm of nostalgia, deep in the vein of experience.  Bucket...list...epic!

On playing Turn the Page he told the story of how he wrote it in 1970 and then when Alto joined he added the moody intro to it.  Sunspot Baby was too much fun!  During Hollywood Nights he threw one of his sweat drenched head bands, splashing audience members with droplets of his sweat.  It was very energetic.

The band was impeccable.  They had the drummer from Grand Funk Railroad.  The Motor City Horns were SO much fun to watch.  Craig Frost on keys, Chris Campball on bass, Alto Reed, of course.  The back up singers brought some serious percussion to the mix and added so many nuances; they were wonderful.  Alto was so incredible on the saxes, etc.  He really does embody 'cool' naturally.  This man is awesome and chalk full of energy.  At one point he was playing 6 or so maracas IN EACH HAND!!  He got the crowd going and still can kick a pretty high leg while playing some mean sax!  The horn section was great, along with the female backup singers who were also working some stellar percussion in; I can't recall that I have witnessed a woman work a tambourine and shakers as well as I did that night, not even Stevie Nicks.  It was seriously impressive.

Seger's voice, to me, was impeccable.  I was told he'd been a little rough there for awhile but has been taking care of himself better the past couple of years.  It showed!  I was impressed with how his voice still sounded so much like the recorded versions, certainly the same cannot be said about all performers.  He remains true.  He told us things like "There's only one place to go, and that's higher!" when going into Katmandu.  In the heat of the moment, I believed the man! 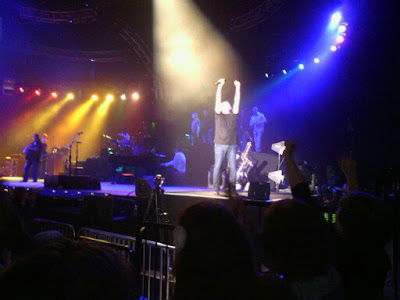 Bob Seger was obviously sweating profusely throughout the show, and had head bands to help sop up his musical juices.  He tossed them into the crowd throughout the night, at one point smiling at my mother's friend who accompanied us and was seated nearest the side of the stage to our right.  He tossed one her way, but it curved off in front of us.  It's pretty awesome having icons ten feet away from you tossing their bodily fluid filled head gear at you.

They did a number of encores.  Against the Wind was performed majestically and we were instructed to walk into the wind...it makes us stronger...face it!  The man and band put on one hell of a show that night.  It's funny how I had wanted to hear Still the Same but in life things are often not still the same, but as Mr. BOB SEGER told me that night, "It always remains and it never forgets!"  He ended the show with Rock and Roll Never Forgets and...you guessed it, another sweaty head band toss!!  Splash those musical juices, Mr. Seger!  You've worked for it, sir!  Turn the page...
Posted By MISSIE SUE at 4:13 PM