I'm on my way back from New York City.  It was an awesome day outing, but not exactly for the happiest of reasons.  My sister has been living in Korea for the past year and a half teaching and came home for an almost month long visit over her summer break.  It was a great visit, the time went so incredibly fast.  It's sad that it is over, but at least we had an enjoyable road trip to the big apple. My friend and I drove her out to JFK International for her 2PM flight.  She is in the air as I write this now.  As per her wishes, we chose to have a little city fun before returning home.

I spotted fedoras for sale on the street as we were driving up 5th Avenue, so we parked the Caliber on 39th Street and hoofed it.  Coincidentally we went past the NYC Public Library!  I've explored the cement jungle several times before, but I had NEVER visited the library.  I was super excited to climb the steps and pass through the threshold!  And what a threshold it was; I stepped through the largest, most ornate door I ever had in my life.  The beautiful textured details and giant gold lion head knocker were just foreplay.  It was like a giant marble orgasm inside!  They had a shop and we bought some books and trinkets. I got Where the Wild Things Are and Oh, The Places You'll Go for Celie; two classics that she doesn't yet have and it will be neat to know they came from the NYC Library.

It was an excellent day.  We had a nice trip out with my sister, and after dropping her off we were able to make a day of it instead of just a delivery.  I'm sure she'd love that we visited the library.  I took this picture on one of the huge globes they had in the Mapping room where we stuck a pin in central Pennsylvania on a map of visitors.  Pennsylvania girls in the big apple jungle!  Seoul, Korea is like New York City...only bigger...and foreign...and on the other side of that globe.  My sister walks the streets of that concrete jungle on her own, with ovaries [balls] of solid rock.  She will  return to her foreign job and her foreign apartment and reunite with her foreign coworkers and foreign friends.  I remain native...and I won't be reunited with her for another year.  I wish her well. 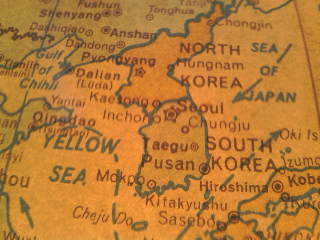