Get Back to Beatlemania!!!

We went to the yearly Beatlemania again this year on the Old Main lawn in State College this evening.  They have been doing this for ten to twelve years now, but this has been the second time we've made it.  It may seem a little weird if you think about it, but don't think about, just go!  It really is a reasonable facsimile, you won't be too disappointed.

Now, given, they aren't exactly clones or anything,but The Cast [of Beatlemania], as they are called, dress the part, even change outfits for the Beatles' different stages, and sound pretty close to the fab four!  Their music director on keys in the back helps a lot with their ability to get the sound so authentic and even pull off Strawberry Fields, but the guys are all really decent musicians also.  They don wigs of different lengths and faux Sgt. Peppers suits (which are my favorite) and even sound like them when they talk.  Pseudo John is super, pulling off the voice the best out of them all, and looking incredibly authentic in his white suit and long hair piece.  He seems to carry the show to an extent, which makes sense because he is also the band's manager.

Hey Jude was exciting; Celie recognized that one the most, singing 'Na na na...' and yelling out 'I want John!'  She is her mother's daughter indeed!  It was so cute.  'Ders anover Beatle!'  If she would have only pissed her pants, it would have been like the real thing.

Overall, it is an exciting experience to hear the music of the Beatles being performed live during Beatlemania because there is no way you would ever be able to otherwise.  Go ahead and try to not dance at a fake Beatles concert...I dare ya! 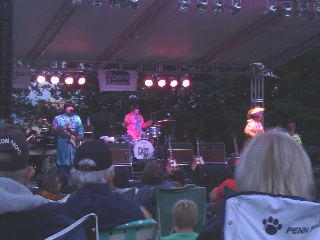