Lastnight I had a dream that I took the crystals down to look at them and they were white melted puddle-looking mounds on the plate.  I was obviously disappointed. I have no idea what this could represent, other than disappointment?  They almost appeared to be a white mold type of deal, as if they had started to rot and had "gone bad" in a way.  Spoiled.  That's what they were.  Molded over with a fuzzy coat.  I remember wondering why they would have gone bad, like so much rotten food.  Maybe they represent my creative aspirations?  Maybe in a way, I feel my creative side, the part of me that creates projects just like this crystal growing blogumentary, has gone sour or like so much of my molded food, has laid unconsumed so long it has been taken over by fungus.  Fungus...mold...it's what grows on things and eats them away when we don't.  Time.  Dormant fruit and time grow mold.  Mold is a growth, but a stagnant growth.  A growth in the wrong direction.  Either this project, I feel, is wrong or something about it.  Or...it's right, and my fear of my creative side rotting away is what it should teach me?

Upon inspecting the crystals today, I am fairly certain that I did something wrong.  The stones look dead, lackluster, and spent for some reason.  Maybe they've exerted themselves as much as possible.  I think their growth period is over.  They are FAR from the crystals in the picture on the kit.  I either took too much liquid out, didn't dissolve the powder enough, or just got a dud kit.  It is possible it takes longer than a week to grow?  You would think maybe they'd grow on.  I have no idea, I don't know crystals.  Mine actually look more like warts than crystals!  Glorified WARTS. Wart gem stones, I could maybe make wart wear?  Classy growths.

I don't know crystals.  I do know that I enjoyed having an experiment, I liked how easily I was able to share my phone pictures with my blog and create a post.  I liked doing a blogumentary style set of posts.  I liked getting back into the swing of my blogging after the crazy end of 2012 and the beginning of the new year. I was able to start the year off with something a little easier and more playful.

All in all, with this experiment I have determined that I am not a scientist.  Not only that, but I apparently can't even grow a set of crystals from a kit from the dollar store.  But, I have also found that I can document it not working, express the physical change from rock to crystal or lack thereof. THAT is the power of playful creation.  I can track my progress, reflect, change, and continue.  I have the desire to make crystals out of rocks, and that's enough.  THAT...is a metaphor.

From Rocks to Crystals,
Missie Sue 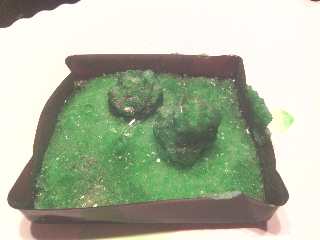