"That's a metaphor!"  That's my catch phrase, or at least one of them. Regardless, I use use this line a lot. I think that the Universe lays things out for us sometimes, giving us hints or steps in our lessons. There is always always always (USUALLY) a deeper meaning to something that you are seeing or experiencing. I don't believe this, I beLIVE it. I see it in action daily. Sometimes, things are so coincidental, such a twist of odds or fate, that it seems foolish to not take note.

I'm currently reading a book that was talking about spring, relating it to personal growth and thoughts, the cutting off of the old in order to allow new growth.  The shriveled foliage from the previous year gives way to new sprouts and buds. It's an interesting concept, stating that things are made to flourish, and then die back, and grow again.

One of the things I have always been timid about is the trimming of my house plants. I'm afraid of cutting off what so much energy was expelled to produce. It seems such a waste, even though many of my plants would do well with a trim more often. Hell, even hair is encouraged to grow with a periodic trim. This is a lesson I need to learn. Trimming promotes thicker trunks and stronger roots, a more stable organism.  You don't see plants carrying around their old growth and baggage like us humans, trees refusing to drop their leaves in the fall.  When something is past its prime, it gracefully takes its place among the fallen, the dried, the brown. The compost. The fertilizer. The sustenance. The Earth. Pruning is quite common in Nature. God is an excellent gardner.

Other than the book I am reading, my therapist was using the analogy of cutting off dead pieces [of yourself] that no longer serve a purpose or empower us in our last session.  This really hit home; it coincidentally followed the theme I was being given. How interesting. I should take note.

I recently acquired the remainder of my grandmother's house plants.  They were unattended for some time after my pap passed, so they are in rough shape, some of them. Among them was this guy, a large over grown dieffenbachia or "dumb cane". It's called this because the sap is actually poisonous. It apparently can paralyze your vocal cords and swell you tongue to choking proportions. Add that to the fact that this stem is about as thick as a can of Red Bull, and it is a quite intimidating creature. What if it doesn't survive? Something my grandmother kept alive for decades, could be destroyed so easily. The stem that she saw, touched, and tended. This intimidates me. And it should...it represents more than that.

I remember once when my gram had just cut it back and put the piece of stem in the dirt, the sideways piece that I now see with a dying shoot on it.  Upon bringing them home, I trimmed the obvious dead off of all the plants, but I waited with the dumb cane's main stem because I didn't know how it would handle the shock or what pieces were definitely goners. I trimmed a lot of it's large browned leaves. His thick intimidating stalk feels like a soft potato. I read you should leave at least 6" or more when you cut it. I'm going to try this and then cut the rest of the large stem into starters. If the trim doesn't help it, perhaps I can turn part of the stem into the dirt and it will sprout? Regardless, it's time to let it go.

The cane's overgrown, meaning its foliage, or weight, is mostly at the top of the stalk that isn't strong enough to hold it. It got carried away. It grew too quickly, too tenaciously to keep up with itself, to support itself. If you've grown out of control, cut yourself back to the roots and grow some new foliage, some new pieces.

If you're scared to do something, I read somewhere that you should not wait until you aren't scared, because that will most likely never happen. If you're scared, just do it scared. Just do it. Trim off the dead portions that no longer serve you. Take care not to let them poison you and silence your present or future, for they can be like the slowest of poisons, but cut them off nonetheless, and let them go...so you can grow. So you can thrive. That's a metaphor, straight from the dumbcane.  Here's to the power of pruning. What dead matter should you cut off of yourself? 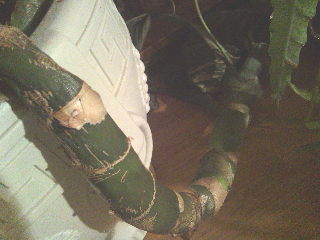