I was introduced to the Mr. Clean Magic Eraser probably over 5 years ago.  I can't even remember when I used it for the first time, but it was a magical moment indeed. I was in disbelief for the longest time.  I was attacking my house's stains and grime just for a chance to witness its power.  I was in shock and awe.  "I can't believe it!"  "Oh my god!!"  "No way!!"  This thing defied all laws of nature.  Nothing on Earth removes these kinds of stains with so much ease!  Nothing!!  Not true.  At one point I wondered if it was covering UP the stains somehow?! (I know, but I just couldn't believe it.)

If you have never used a magical Magic Eraser, I suggest you give it a try.  I actually gave one to my brother for Christmas this year.  I jokingly say that they probably cause cancer or are made out of a raw chunk of cancerous tissue themselves, for nothing fights grime and saves time like this product from the clean man himself.  At first it almost seemed like cheating. It makes you feel pretty spoiled; imagine the hours of labor required of women back in the day.  As if all of our luxuries as women today don't enough already, this makes their continuous work seem like slave labor compared to our duties.  Thankfully we live in the Magic Eraser Age.  Not that it is effortless, some types of stains still require a bit of elbow grease and really break down the eraser, but it makes a lot of jobs a LOT easier.  It really does erase dirt!!  I'll be damned.

One of the first things I discovered the eraser was good for was rust rings.  Ever sit an empty tin can on your counter and get that ring?  The Magic Eraser takes them right off! POOF!!  Another thing it works great on is soap scum.  It wipes rings on tubs and shower walls right off.  It removes dirty hand prints off of walls and ceilings.  It is harmless to most surfaces too.

The only surface I found it messed up was wood paneling.  It actually is very abrasive, it rubs a fine layer of the surface off, I think.  DO NOT CLEAN YOUR KIDS WITH IT.  By watching how it works, it is OBVIOUSLY abrasive.  A woman apparently scrubbed her child's arms with it, "burning" their skin.  People freaked, acting like the thing chemically burned the kid's flesh or something, but I think what it would have been was a really bad burn from friction.  After hearing about that story I slightly rubbed the eraser on the back of my hand to see how much pressure or rubbing it took.  It obviously started to turn red and give me a rash type of irritation after a few scrubs.  I couldn't imagine scrubbing my kid with it, the abrasive nature of it alone, but who knows exactly what it IS made of.  It could even chemically burn too.  Who knows?  Bad news.

Tonight while cleaning the bathroom counter, which also doubles as my dark room for my screen printing, I found that the Magic Eraser easily removes dried emulsion from formica counters.  Wood stain, however, is a lot harder to remove and took a lot more elbow grease and it didn't even entirely come off.  I wonder what that says about those two chemicals in comparison to each other.  I also found that it removed dried latex paint from my plastic sink facet knobs.

The Magic Eraser should be tried, get it wet and rub it on all of your stains and gunks.  They cost 2-4 dollars each, come in multi packs, and even a heavy duty version now.  I don't know if it's made out of cancer, or toxic waste, or heavenly clouds.  I don't know what all surfaces it is safe on, but it is for most.  I do know this thing works like a charm!  The Magic Eraser is certainly worthy of its name; it is truly magical.

Have you ever tried the Mr. Clean Magic Eraser?  What type of stain amazed you the most? 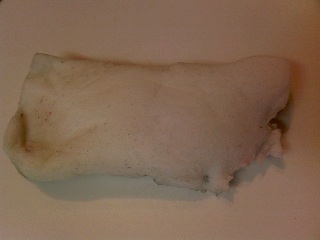