The Abrasive Side of the Sponge

So, I was watching Sponge Bob with Celie the other day and I laughed so hard and mused a bit.  It's a funny show, and sometimes I doubt my 3 year old is learning much from it, but I am, so it seems harmless enough?  Sponge Bob is THE man in this house.  He is the only show that can actually keep the kid hooked for more than 15 minutes at a clip.  I've never seen anything like it!  Are you kidding me?  Of course I shall embrace the Bob Pants!!  This is something we can both 'learn' from.

As Sponge Bob continues on his way, he soon finds that he can't control his other side, which is basically a green face on his back that randomly flips around and throws insulting remarks at his friends. He even tells off his grandma at a cross walk and refuses to help her across the road. For awhile he's sort of blissfully unaware this is happening, but then he begins to realize all of his friends are mad at him and he is filled with regret when he thinks of how he treated his grandma. The Awakening!

Abrasive is an adjective that according to Webster's means 'tending to abrade' or 'causing irritation'. Irritating. This basically means that Sponge Bob's other side was irritating to everyone around him. The things he would come out and say in almost a bipolar manner could be hilarious. Some things were just brutally honest. Other things were just down right mean. There are two sides to every sponge. I know people like this. People that seem to announce it as they parade through life. Others, like myself, don't really realize how the other side seems because our yellow side is so snarky, sometimes it's hard to tell the difference. I digress. 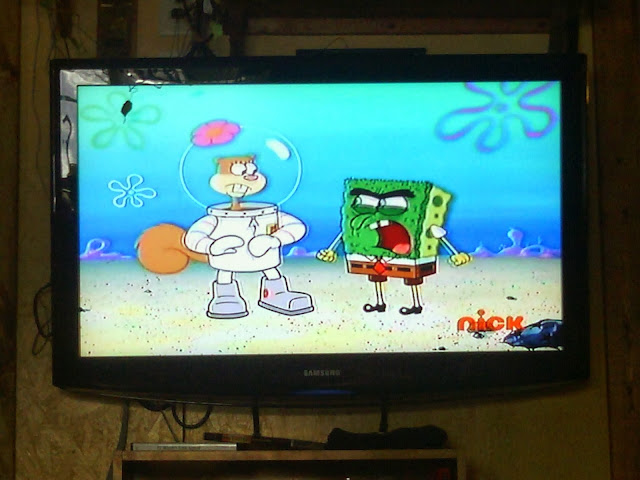 Ultimately, Sandy Squirrel ended up ripping the abrasive face right off of Sponge Bob's back. What a pal! That's what friends are for. We could all use to be a little more abrasive on some tough messes, and that's what abrasive sides are essentially made for, those ancient, caked on messes that give the most resistance. But for those softer, milder jobs, the other side of the sponge is more than sufficient. The abrasive side, which is used for tougher stains, is overkill for those gentle jobs. If it could only be controlled, maybe we could get the job done without scratching the china? No matter, squirrelly friends will always be willing to help you find your true face on the other side of the sponge.