I met Richard Sleigh last year at the Greenwood Furnace Folk Gathering.  The two Melissa's were lucky enough to have randomly set up camp right next to him after already meeting him in the parking lot shortly after arriving and then attended two of his workshops at the event. I learned a lot from Richard about rhythm and the harmonica. I also was at the chapel for his solo performance that weekend and it blew me away. This man was so chill and laid back, so easy to speak to and learn from and still left the entire church silenced and awed by his amazing short show. When Melissa informed me Richard was playing at the Elk Creek Cafe on the 9th, I was in!

I left Greenwood Furnace with a copy of Richard's 1988 album Steppin' Out. Melissa took home a copy of The Joliet Sessions. So we have been listening to Richard for a couple of months now. It was so great to see him play again, and this time he had the backing of a lead guitarist and drummer, which added to the sound. It's still amazing to hear someone completely rock out a solo song on the harmonica and have it come across with as much feeling as Richard does. His timing is impeccable, his performance is damn near flawless. He is an incredibly impressive musician.

On this night, as well as some solo harp numbers, we heard songs done with his band including "Playing With Fire" by the Rolling Stones, "Bad, Bad Whiskey" by Amos Milburn, Santana's "Black Magic Woman", "The Heart of Saturday Night" by Tom Waits and others. Van Morrison's "Into the Mystic" excited the hell out of me. It was interesting to hear the horn part done on the harmonica. Later, Jerry McCain's "She's Tuff" was a pleasant surprise because it's been one of my favorites on Steppin' Out. Also, after having been moved at the chapel performance when he invited Simple Gifts to join him for his last number, I was psyched to hear "Long, Black Veil" again. Phenomenal! However, the song that I was the most impressed with at Greenwood Furnace was a cover of Fleetwood Mac's "Oh, Well". He played this one on this night, and it sounded even better with the added percussion nuances added by the drummer. Oh....Well DONE!!

All in all, this was a great night. Elk Creek is always wonderful, we enjoyed some tasty tapas and beer. I had a good time and Richard put on a terrific show. If you haven't ever seen the local musician Richard Sleigh perform, he is definitely worth checking out and apparently plays a regular gig every second Thursday at The Elk Creek Cafe in Milheim. This show was great but it also made me appreciate seeing him last year in such an intimate setting and in such a raw, personal way. It was cool being able to speak to him again. He sounded great with his band, but is one standalone artist, that sure can make a harmonica speak to you and one hell of a nice guy to boot! He ended his night with a coffee and a piece of carrot cake; sounds delicious. The man has excellent taste. Richard Sleigh, we salute you! 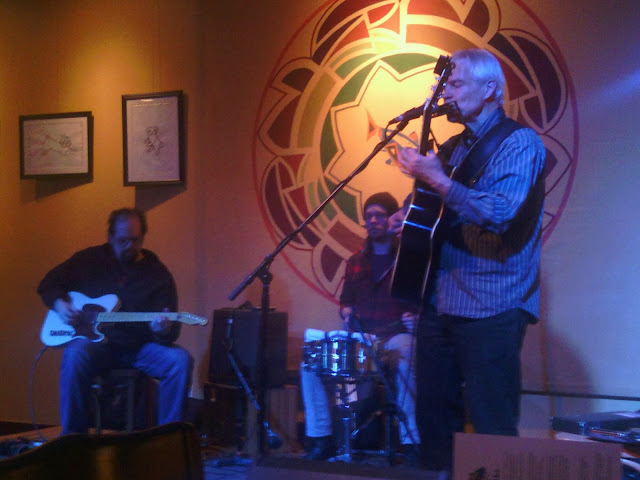