After the Goldrush Jerky

So, I don't exactly know when it started, when I first spotted the face of that rugged pick-baring gold miner on my first package of Gold Rush jerky, but I will forever be changed by the tasty meat inside his package. I have purchased and eaten such a great amount of this product, I should own stock in the company, so I figured it deserves a blog post at the very least. You know, spread the word. It's good stuff! After tasting the tender pieces of beef made by Goldrush Farms, there has been no other jerky for me! 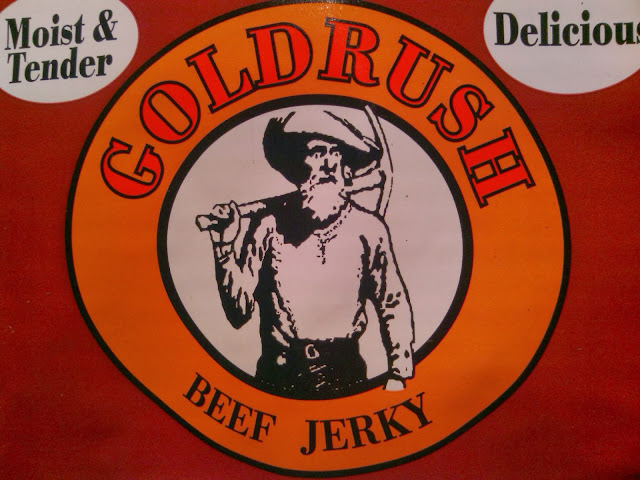 I've always been a big jerky fan; there's nothing like protein to keep you going. I've tried many kinds. I can honestly say Goldrush is my favorite, hands down. The package declares "Moist & Tender" and "Delicious" and they aren't just whistling Dixie! You get 3.25 oz (91 g) of yum for around $5.25 and although jerky in general is pricey, it is seriously worth every penny. My husband even says he would gladly pay a whole dollar more for it. The package says to refridgerate after opening, but it seldom lasts long enough to need it. That's mostly what sucks about paying over 5 bucks a pop.

Goldrush is better than Oberto, and even better than Jack Links, in my opinion. It has great flavor, is incredibly juicy and not overly salty. I have only seen it at The Market Place, it's sort of a local buy, being made in Litchfield, Ohio. They have it at The Market Place, and as long as I see it there, I'll buy it like milk and bread. It's a staple. It comes in Mild, Sweet Barbecue, Spicy, and Teriyaki. Sometimes I wonder if I'm forming an addiction to this meat. It's marvelous. Marvelous meat!

Overall Goldrush Jerky is an excellent buy. It's the best jerky I've had aside from homemade venison jerky. As long as it's there, I'll buy it! That old bearded gold miner has the key to this girl's heart; after the Goldrush jerky, nothing else will taste quite as good.