I wanted to make sure that I blogged about this photo moment, especially since my phone ran out of room shortly after taking this picture and I couldn't take video of this day. On December 18th, 2015, Celie was in a Christmas program at her preschool. It was tiny, as there are only 9 kids total in her class, but it was kind of a big deal. Every kid had a spoken line to recite in front of all the parents and family. Given how she handled the Halloween party that they had, where parents were allowed to take pictures and watch as the teachers guessed who everyone was, I was a little nervous about what was essentially her first public performance.

We practiced her line for awhile before the big day as instructed by her teachers.  Each child had his or her own line to recite and then they had a line together to say in unison. It was pretty exciting. She didn't seem thrilled. I tried to stay positive and excited about the whole thing so I wouldn't make her nervous myself. She had her line down pretty well and was spouting off some of the other kids' lines. She said it super fast at times and super silly at other times. I just hoped that they were working with her too on it and she was taking it more seriously in class. Come the big day, she made me proud though.

Grammy and Pop came to see her that morning with me. She was excited and went over with the other kids just fine, instead of refusing to come in like she did on the Halloween party. I didn't bring my Nikon because I thought I would make her nervous if I made a bigger deal about it with a big camera. She knew what to expect this time though with the visitors coming to view the program. All of the parents were there with their cameras and that's what I think freaked her out about Halloween so I just tried to be discreet with my phone. Then it spazzed so I ended up just watching after taking this picture, which was nice. She recited her line just fine and put her little candle where it was supposed to be. "Light the candle of peace today, the giver of peace is here!" She didn't freeze or cry or freak out or forget her line. It seemed like no big deal, or at least she made it seem that way? Either way, she did good. It was cute.

I was trying to remember how I would have handled such a task at the age of 5. I don't think I would have even done as well, but then again I can't remember. At one point in my childhood I was rather outgoing and didn't give a shit. I slowly got taken over by social anxiety later on, but I still did things then, I just felt like I was dying inside while doing them. I openly talked with Celie about her nervousness, though, and she shared the fact that she was a little scared but she wasn't terrified or anything. "Just a little nervous," she said. I assured her that it was fine to be a little nervous or scared but she will be fine, all the other kids have lines too. I think that was maybe why she was better, because they were all in it together. There is something to not being the only one, right? Strength in numbers? Plus, we practiced at home and she practiced it with her teachers a ton in the days leading up to it, and practice, also, leads to confidence. At least, that has been my experience. 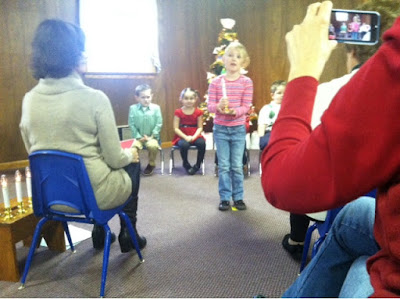