My Kid is Creepy As Fuck

My kid can be a hurricane. She can be a firecracker and a handful; she uses every second of her waking day for movement. At the very least, it can be a little challenging for her to be still...especially when she's tired. She fights it to the end, even when she goes willingly. Books and snuggles, she will still literally go through a twitching and relaying-of-her-dreams-to-you stage before giving in to Morpheus. The struggle.is.real.

I have also decided that she is part zombie. Exhibit A...this sweet photo I took of her this Christmas Eve. D'awww! Super cute, right? NO! It's creepy...it's creepy as fuck?! I have spent a number of times over the past 5 years panicked and staring at my child, wondering if she was breathing. It's a little weird, I think, that she sleeps with her eyes partially open!

Now, I don't think that she got this from me, or her dad for that matter. Truth be told, my brother sleeps with his eyes slightly open the same way. So she got it from Uncle Tony. It's actually funny having a kid and seeing so many aspects of your siblings in them. I wasn't prepared for my brother's weird eye thing. It's funny, though. 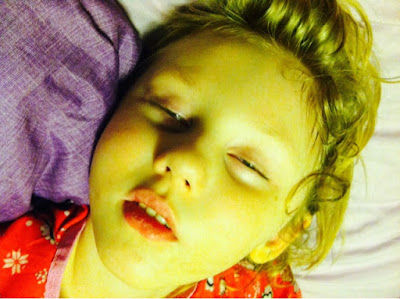 So, at least they aren't COMPLETELY open. That kid's gotta be out there somewhere, the poor bastard! Maybe this title IS a little over the top. She doesn't chant in her sleep or anything, I'm sure that kid is our there too! I joke that she hates sleep so much that she doesn't even fully close her eyes for it. Maybe that's why? It's like Enter Sandman...she sleeps with one eye open. Or---two eyes half open? That equals one, right? What's she looking at? At times I have closed them, but that just seems too morbid and freaks me out. So I just let her be...Celie, the squinty-eyed sleeper, lover of worms, coordinator of chaos and keeper of caterpillars. Dream on, you crazy kid!
Posted By MISSIE SUE at 6:44 PM