The Bunny Mouse and the Pasta Bush

Earlier this summer, we had an interesting encounter with a family of bunnies. It was mildly challenging. They were actually in a flower bed that is right beside where we park the car? Buster sniffed the first one out where it was hidden under the pine needles and pulled it out. I immediately told him to drop it and miraculously it was okay because at the time it was only as big as a mouse! It's ears were back, it didn't have its eyes open; it was the smallest bunny I have ever seen!
We didn't know what to do, at first. We thought, surely, it had been anandoned or was a single bunny born to a young naive mama, maybe? Where was she and why would she have a baby so close to the house for one, but also so close to the cars? We thought about putting it in a different bush farther up the driveway , but ultimately and fortunately, we put it back in the flower bed by the big Hasta bush (or Pasta bush, as Celie calls it). It tucked itself down under the pine needles in an amazing way!
Afterward, I did my Google research and I was glad that we put it back where we found it. I read that most baby bunnies are thought to be abandoned but it is just because the mother rabbits only tend to them a few hours a day, before dawn. I also read that it is untrue that the mother would not take care of it if we handled it, a mother rabbit has an incredible sense of smell and will still sniff out her babies even if human scents are on it. We left it and hoped the mama would tend to it again.
I kept Buster away from the flower bed the best that I could for a few days and assumed she maybe reclaimed it? I don't remember exactly how it all went down, but he sniffed it out again and dug it up from the pine needles. I was surprised he never hurt it when he did this? I picked it up this time and put it back, it dug deep in the pine needles again and just stayed there, a little shocked. The mother was certainly tending to it because it was plump and had obviously grown. After putting it back in the flower bed, I found it coming out on the opposite side. I picked it up and put it back in the flower bed. But wait a minute? I checked where I had placed the other one. Indeed, it was a different bunny!
Just about the time I noticed this, ANOTHER bunny emerged. They were groggy and clumsy, their eyes were just starting to open. We put the other bunnies repeatedly back into the flower bed. They were so sleepy, obviously spooked from the Buster encounter but not exactly able to flee. They would make slow attempts and I put them back, hoping the mom would remove them or something? I tied Buster and kept watch. On this day I was eagerly waiting for evening, because they were just about ready to leave their Hasta home and I am not the best of bunny sitters. The next few days we looked out for them while pulling the vehicles in and kept the dog away.
They slowly disappeared; one evening, at dusk, the mother was chilling just about ten feet from the bed, nibbling on some grass. The last lingering bunny was near her. When my husband pulled in, she was spooked and I think she may have grabbed the bunny and took it with her because I heard a squeak from it as she disappeared. I considered myself successful by not finding any nearby dead bunny bodies afterward, so I believe that they all survived.
Rabbits symbolize fertility, reproduction, and abundance, among other things. I always like to check for the symbolism of animals when I encounter them. Of course, as with dream interpretation, I value my own personal symbolism, if any, for the creature first, but some sites are rather insiteful. One thing, in particular, resonated with me:
"In some Native American traditions Rabbit is known as the Fear Caller, due to it projecting its fear of those wishing to eat it, and thereby attracting the predators it fears." The rabbit can symbolize our projection of our negative thoughts. Perhaps, these bunnies were a sign to acknowledge my own inner fears and to tend to them gently with compassion.
"Fearful thoughts reproduce (like rabbits) and manifest what we fear. Rabbit people may be afraid of tragedy, illness, and disaster, thereby calling those very fears to them to teach them lessons." So, I perhaps need to be a bunny sitter to my own little inner bunny fears. I need to be gentle with those parts of me and accepting, while also being mindful not to manifest those same fears. Keep exploring my parts with tenderness. I like to think that these bunnies were a sweet reminder to continue on my journey down the rabbit hole, and to lose my fears on the way down. Point taken. Thanks, Mother Nature!
SOURCES:
http://www.shamanicjourney.com/rabbit-power-animal-symbol-of-creativity-intution-paradox-and-fear
http://www.whats-your-sign.com/symbolic-rabbit-meanings.html 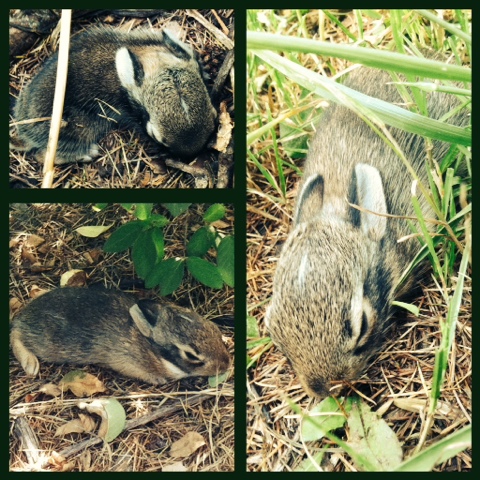