Reflecting the Stigma of Depression


Robin Williams’ recent passing has everyone sad, a bit confused and even some ranting up on their social soapboxes.  Facebook blew up last night with the news and everyone was chiming in on the subject, even those who probably should not have been.  I saw many comments and statuses from people asking why, some even stating that celebrities and others just can’t deal.  It is in comments like this that we see how many people simply do not understand how depression works or even what it is, for that matter.  Many people believe that depression is just being sad.  Often times the word is used interchangeably for the state of temporary sadness we all experience from time to time.  People seem to think that Robin Williams should have been able to snap out of it or just think positive and change his mood.  For those of us suffering from depression, we know the dark truth.  Depression is a demon that surrounds you no matter where you go or what you do, and as this tragic event shows us, no matter who you are.  Depression does not discriminate.  All walks of life are afflicted and anyone can be sucked into this black hole, even the brightest of us, even the most talented...especially the most talented.

In retrospect, as soon as I heard the news I wondered how I or others didn’t recognize this about Robin.  Looking into his face, I think you could see his inner pain.  His manic style of stream of consciousness comedy was so intense and unmatched, but Newton’s law tells us that what goes up...ultimately and inevitably must come down.  Ain’t it the truth?  In my readings I saw people mention that most comedians suffer from this type of manic expression of their darkness.  It is in my opinion that a good majority of artists in general are plagued by this same darkness, for no light that bright can exist without its corresponding shadow.  And it makes for great art, don’t get me wrong, but the creation of that art can be one of the most difficult graces to grab onto.  The hardest thing for us to do is to let that inner light shine through that murky cesspool of despair that shrouds our souls, and it can be quite the struggle.   People do battle with depression and often they do this most of their lives.  There are ups and downs, major episodes, minor episodes and then the mania, which can seem like a relief from the pain, but in all actuality, it is one of the biggest energy suckers of all.  Once you go up that high, you go down even harder.  It’s difficult pretending that everything is fine or that you are “normal”.  Robin Williams never pretended to be “normal”, per se, but he did hide his pain behind the mask of comedy.  I don’t believe that I’ve ever pretended to be normal or faked it, but I certainly wear my own mask to cover the many faces that I have. 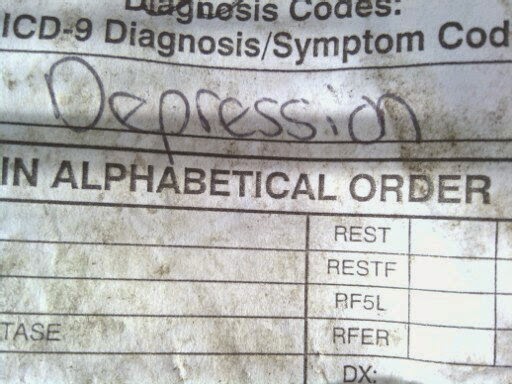 I vividly remember the day that I carried my diagnostic sheet up to the front desk after seeing the doctor and was given the referral to my therapist and the prescription for my medication.  Looking down at that diagnosis of “Depression” staring up at me like some label, like a mocking label, was hard to handle at the time but it was certainly easier than everything else I have had to deal with since.  Admitting I had a problem was just the first step in this long journey of recovery that I have been on.  I suffered in silence for almost 20 years before getting any help.  I feel guilty that the Robin Williams situation makes me feel better in a way, but it does.  It also makes me feel incredibly worse, because it is terrifying.  This situation is terrifying in that the demon that took his life is the same shadow that lives inside of me, however different.  I haven’t had suicidal thoughts since college, but you never forget that feeling even if you do heal.  It’s like a scar on your soul.  Even though I don’t believe suicide is ever the right choice to make in this situation, I don’t judge his decision because I have had that same demon whisper into my ear.  Today I am taking a look at my own scar and it has been making me sob off and on all day, especially when looking into his face in all of the pictures people are sharing.  It is proof that this illness is serious and real and that I should be proud of the progress I have made because many of us are not so fortunate.  It is also a reminder that I am not alone in this.  None of us are alone in this.

It has been raining all day today, offering a deep cleansing for our collective soul.  I think why this is so sad for me and others is because we can relate to it so well.  I understand what it is like to mask the darkness inside of you and carry on excitedly and happily for the benefit of others, or simply for survival.  I understand what it is like to go to that manic place only to fall to the bottom once again.  It is incredibly draining and life sucking.  I think a lot of us can relate to Robin Williams; I think humanity has taken a deep collective sigh at his passing.  Nothing seems right about this but nothing is wrong in talking about it and perhaps his death can serve to help others take this condition more seriously and treat it with compassion.  Depression is a real problem but suicide is never the answer; that is something that depression tells you when you are vulnerable.  But people should not shame others for having suicidal thoughts, either.  It just goes with the territory.  Robin Williams struggled for years with his depression, and ultimately it won the battle, but nobody should judge him as weak for this and throwing words like coward around at suicide victims and the depressed does nothing to extend the compassion that these situations and people so desperately need and deserve.  He fought the good fight for years and he did one hell of a job at that and anyone that deals with depression will agree that is one of the bravest things that you can do.  Perhaps he was just tired of fighting that demon or simply succumbed to a moment of weakness and lapse in judgement, but we don’t REALLY know, do we?  You can never truly know the heart of another.  May his beautiful soul finally rest in peace.  Na-no na-no.