I attended the Ari Hest concert at the Oak Mountain Hideaway House back on the 23rd of August of this year. This was my second house concert at the Oak Mountain Hideaway House and my first time hearing Ari Hest.  It ended up being yet another memorable experience! The Oak Mountain Hideaway house has such a warm and inviting atmosphere and this is a wonderful local venue to enjoy a good night of music. I had not heard anything by Ari Hest prior to the night of the concert but after his intimate performance and getting to meet him, I was officially a fan. His music is impressively moving and there is truly something to be said about being able to experience a recorded artist’s voice without going through a microphone or anything electronic whatsoever, simply projected through the air in its natural state. Ari Hest standing with his acoustic guitar in the middle of a gorgeous living room; you don’t get any more unplugged or acoustic than that!

Ari Hest’s performance was so incredibly intimate, like an episode of Storytellers or a private performance by an old friend. He openly discussed his musical influences and shared the stories behind the songs as he performed them. He played one that he wrote for his niece, Rebecca, speaking lovingly of her and her presence in his life. He urged the crowd to make requests if there were any and was obviously at home with the laid back environment. He donned a plaid button down and a pair of Keds, and with them he brought on some contagious foot tapping. Ari has an intense finger picking style that he says he owes to the musical influence of Lindsey Buckingham, one of his favorite guitarists. Lindsey would be proud, because he had an impressive playing style, and I loved how he incorporated knocks on the body of his guitar into songs. 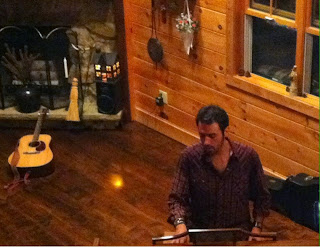 Ari’s voice is deep and robust but also beautiful on the high end. It was the perfect blend of vibration and gave an amazing feel to his songs. He told the tale of his song inspired by Norah Jones and you could almost feel her come through during the performance. He spoke of another song, Until Next Time, which was about a chance meeting between two souls, which I think was my favorite. He is a quite excellent songwriter as well as performer. Some of my favorites were Until Next Time, Cranberry Lake, The Fire Plays, and Less. Cranberry Lake was incredibly fun because he sang it as a duet with Oak Mountain’s hostess, Annmarie. It was wonderful listening to his stories and watching him perform; he was so relaxed and chill. You seldom get to witness an artist in this kind of venue...in a living room...having an intimate, personal moment with a select handful of people. It really was like an episode of Storytellers. It must have been just as exciting for Ari.

Ari is excellent on the guitar and I was majorly impressed with his style, being a Lindsey Buckingham fan myself, but what was even more impressive was the fact that he also played the piano. He sat and tickled the ivories for us a good bit during his performance. I’m always excited to see a singer/songwriter that plays the piano as well as the guitar so I really enjoyed this about Ari Hest. He’s good at what he does. He shared the fact that he comes from a musical background, on both sides of his family and ironically his father did not want him to get into the music business but then he ultimately ended up doing it anyway.  It’s a good thing, too, because it’s obviously his calling. Another cool thing about Ari, though, is that at one point he WAS signed to a record label but is now an independent artist, which I find very commendable. 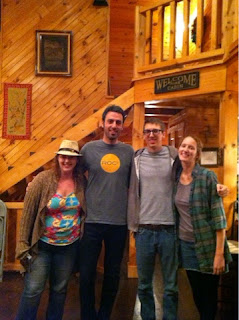 We met Ari after the show and had our picture taken with him. I asked him to sign a copy of his album The Fire Plays that I bought after the show. I also grabbed a copy of Sunset Over Hope Street and a copy of his newest album Shouts and Whispers. He was so eager and happy to oblige us. On a side note, he also is much taller than he seems while he is performing once he is beside you with his arm around you. He’s a very talented guy and totally worth checking out!  It was a wonderful experience getting to see him and enjoy his music, especially in a venue like the Oak Mountain Hideaway House. This was actually Ari’s second house concert at the Oak Mountain Hideaway and if he should ever choose to return again, I will certainly be in attendance! Good times!