That time when my breasts ruined a wedding ceremony...

So, in 2011 I was asked by friends to play the music for their wedding ceremony.  Me.  Acoustic guitar.  Alone?! Finger picky whatever I want.  I was also requested to do a piece of a specific song while the bride walked down the aisle.  This was serious stuff to me, and I was incredibly anxious about it!  I was also a little baffled as to why they thought I was capable of playing a wedding ceremony in a church where I am usually far too consumed with the fear of spontaneous combustion to think about the guitar, but their trust in me was encouraging.  Either way, I was horridly nervous and incredibly flattered and excited all at the same time. It was an endeavor and one of the coolest musical experiences I have had.

I had heard about the Bridezilla show enough to have a little bit of worry. The bride was awesome, though, about everything and it went well. It wasn't like that show at all! The song for her walk down the aisle was a secret to the groom, though, which was sweet. It also wasn't exactly an acoustic number, so I had to do my best to figure a light finger picky deal for it, girl it up a bit? It worked. She dug it. I practiced those barre chords so much to avoid screeches and other bad sounds; it's ironic what ended up happening.

On the wedding day, everything was cool, my volume was set, I was in position. I was doing a couple random picking progressions while the parents and families were seated. During the procession and recession I chose to play a piece I wrote myself. This song, while still untitled, is now fondly referred to as "The Wedding Song". It had lyrics, I just omitted them for the ceremony. They aren't exactly wedding lyrics, I reckon? The music, however, seemed to fit just fine.

Everything went well while I sat and played for the wedding party's entrance, but then...I stood up for the bride's stroll down the aisle as was the plan. Well, I broke into the song, or 'piece' of music, rather, barely long enough to be considered anything else, and I realized something was wrong immediately, but didn't realize what until it was too late. The piece was so short and precisely timed I didn't really have time to correct it without possibly ruining it worse, so I just went for it. Apparently the groom was incredibly thrilled with their special selection, although, I never saw because I was focused on my field of error.

My volume was supposed to be set roughly at 50%, and it was for the sitting part. I realized that once I stood up, my boobs slid my volume all the way up!!! I mostly could tell because you could hear every slide and squeak of my fingers over my voice. Also, to my dismay, the bride, who came to a stop at the end of the aisle positioned directly in front of a PA system speaker, flinched and jumped with every fingering sound. I was able to look up and see that, unfortunately. All of that practice!! Those fucking barre chords!!! Gah!

I was told afterwards by a friend that it sounded to him as though the PA system was just kind of bad, which made me feel a little better, I guess...about my breasts ruining a wedding ceremony...and only the most crucial part, at that. My final playing for the recession, though, was pretty flawless. I tried to redeem myself and end it on a good note...literally.

Overall, it was a huge honor and privilege to be able to play my friends down the aisle and I am incredibly grateful and thankful that they presented me with this opportunity. I was, however, a little disappointed that my female bits had to interfere with my playing as they did. It's challenging to play the guitar with a decent set of breasts! Not only can they make it awkward to hold, they apparently sometimes have a mind of their own! 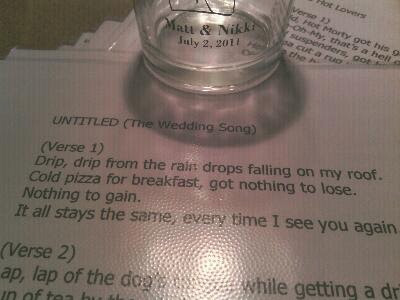