Maybe Minnie is just a crazy bitch.  She always seemed a little unstable.  Not necessarily as high maintenance as Miss Piggy, but she never seemed like she would be the easiest of mice to co-exist with?  Maybe Mickey is just an asshole.  Maybe he said an incredibly sexist remark during a fight?  Maybe he told her that her ass looked fat.  It's really hard to say, but something is up with this band-aid.  What's the story?  "SMACK!!"  Minnie is the one throwing the punches, so I'm going to go with her being in a rage after coming home from the gym and Mickey didn't have dinner ready or the dishes done??

What kind of cover up is this for a boo boo, though?  I'm not sure how much better it would make you feel, especially if your wound was received by an act of violence?  Why don't we just cover up cuts with band-aids covered in pictures of knives and rusty nails??  Maybe just a fist against a face??  It may sound odd, but trust me, it's cute when a mouse is doing it. 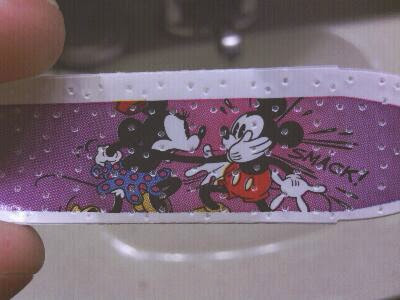