Celie was playing over by the dog pen today and pushed her kitty through the fence.  I did't see her do this.  She started screaming and I ran over, thinking they hurt her somehow.  Her back was to me and she didn't turn to face me, so I figured it couldn't be that bad.  She didn't turn because she was watching and upset about the outcome that was playing out.  She was learning the consequences of handing over her beloved toy which she probably squeezed through the fence just to see what would happen. She found out.
Kitty was resurrected today, freed from a fetal sac of spit, like a new born calf. It was so disgusting; I about had to chew through it myself, like a wild mammal.  Dog spit should be used as an industrial adhesive!  At least the kitty was saved, unlike some other things she threw in it afterwards.  Kids aren't the best scientists but they sure do experiment a lot! 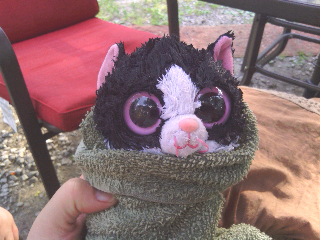