On Monday, I noticed Buster was acting drastically different than he was just the day before. He was not jumping up when he normally would be, he was walking gingerly with his back arched. He would stand and stair at nothing for long periods of time when he actually did get up, and was obviously having problems sitting down and turning around. His back legs were giving out on him at times and he had his ears back and his sad face on like he was in pain. Celie noted how he was just standing in the dining room like he couldn't get past the chair beside him, "Awww, poor Butter!" she said, like she knew he wasn't right as he was just standing there. For months, something in me has been worried about Lyme disease, mostly with Celie, but I'd thought there were a few times Buster seemed off. As soon as he was weird Monday, I knew my instincts had probably been picking up on it the whole time, even though he was showing no signs and I thought I was just crazy. After getting Celie ready and out the door, I called the vet while she was at preschool and was grateful they could get him in that same day!

Buster was hilarious going up the interstate, in between solemn open window sniffing, he just sat there staring at the road ahead, calmly, like a pro traveller. He seemed to be deep in thought. What was he thinking? He looked like an old man. Most times I think he seems far wiser than I. Buster is 7 now, he is a boxer mix, he is stubborn, goofy, playful, annoyingly loving, and the best dog I have EVER had. EVER. He is so human in his emotions and expressions. I remember my sister, Ali, laughing at me when I would have full conversations with him...because he totally talks to you, guys!! He was awesome years before Celie came around, but has proved himself to be the best kid dog ever, tolerating dress up and other childhood chaos. He is so good with her, it amazes me. Celie tells me that Buster is her dog now, all the time. She also tells me, "I love Butter more than you and dad, but I still love you, I just love Butter more!" Needless to say, she would be lost without her pal, Buster.

After a physical exam, a urinalysis and a blood test, the results came back and our poor Butter Wutter does, indeed, have Lyme disease, as well as anaplasmosis, the less heard of but almost as common tick born illness, AND a bladder infection!! No wonder the poor guy was feeling rough. So, now he has two different antibiotics to take, one twice a day for his bladder infection for 7 days and then another for the Lyme and anaplasmosis that he will take for 28 days. Hopefully the antibiotics get him feeling more like his old self again. I am getting a glimpse into old age as he hobbles around and sleeps more. I hate seeing his legs give out but am grateful he had such a bad morning Monday so we took him in. The Susquehanna Veterinary Clinic was great! Everyone was wonderful and I am hopeful that he will soon be on the mend. I am grateful. We want our Buster Buddy around for as long as possible! 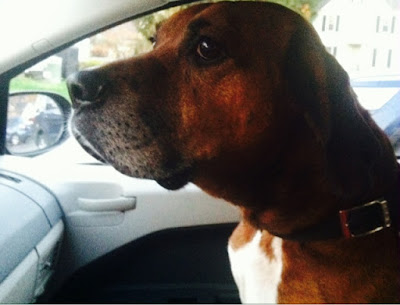