BOOK REVIEW: The Game of Life and How to Play It 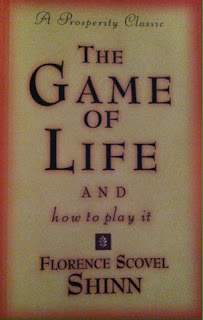 The Game of Life and How to Play It by Florence Scovel Shinn is considered a "prosperity classic". This is a short read I added into the line of books I am currently reading just to get a break from the therapeutic mental work. I was intrigued because this book was originally published in 1925, so I wanted to see how it compared to other "prosperity" writings I have read. This book was obviously a source for many modern writers, but also offered some new insights to me and information on spiritual law.

If you have read Rhonda Byrne's The Secret and enjoyed it, you would probably enjoy this book. If you think The Secret is a bunch of garbage you actually might still enjoy this book. To me, The Secret was a commercialized rip off of ancient teachings, squeezed into a cheesy package for average Americans. It talks solely of the Law of Attraction and how to "manifest" things into your life. It came off as fairly superficial and tacky. I still liked its message of "you get what you put out", although most of its stories or examples were of people wanting a Lamborghini or other material trappings, which didn't seem very spiritual to me at all, or maybe that was simply because of who the target audience was? Who knows. Regardless, this book, in contrast, is even more simplistic while at the same time being much more informative and dare I say "real" to me.

Florence Scoval Shinn not only talks about the Law of Attraction like Byrne, but other "spiritual laws" such as the laws of Prosperity, Nonresistance, Karma and Forgiveness. She explains about the Power of the Word, stating the importance of our spoken words in bringing us what we declare. She explains the game of life as a "game of boomerangs", declaring "man's thoughts, deeds, or words, return to him sooner or later, with astounding accuracy." She says giving opens up the way to receiving and people must trust their intuition or their inner guidance. To me, all of these things are truth.

She speaks of Love as God in manifestation, the "strongest magnetic force in the universe". She quotes the Bible quite often, explaining from an energetic stand point what Jesus actually meant by many of his teachings. I kind of enjoyed this. I enjoyed her usage of terms like Infinite Spirit for the Divine, as well as her talk of divine design, "Divine right" and Divine selections. Although much of what was in this book was repetition for me, it all gave a different yet similar spin to things I have already read, believed, and felt. I also gained a new understanding of the Biblical tale of Adam and Eve eating from the tree of "the knowledge of good and evil" because of this book, seeing it now as symbolic of the birth of Ego and the shift away from unity consciousness into dualistic thinking. The way I took it, our "banishment" was more of a birth into third dimensional consciousness, shifting away from the unity of the fourth dimensional "God" space. I don't know why I never saw it like this before from other readings, etc. but this made so much sense to me that I had a mini "Aha" moment. (PSA: The Bible utilizes symbolism and is not literal.)

While the book was God heavy, I didn't mind this, but some might. I personally think there is a morsel of wisdom in everything if we can keep from being offended long enough to consume it. The author basically explains how the Universe, being Infinite Spirit (or just an energetic field of potentiality depending on how you look at it...i.e. The Force), responds to our words and thoughts with amazing accuracy. Thoughts ARE things (read Thoughts Are Things by Prentice Mulford, written in 1889, it's another old as shit book about manifestation and the power of thought.) This infinite field can be manipulated if we are aware of our "boomerangs" and the actual language we are using to "communicate" our desires. As within, so without. As above, so below. To every action (thought, word, deed) there is an equal and opposite reaction (manifestation). This isn't just spiritual law, it's physics.
Posted By MISSIE SUE at 5:41 PM