The Sacrifice of Joan of Arc: Burning for Change

"We set the night on fire!!"
Well, not so much the night, but last night.  And not so much the night, but a tree.  Last night, we set the tree on fire; we burned a dead piece of pine in an attempt to symbolically release things we no longer want or need.  (You know me and symbolism.)  I think that there is much symbolism in the purification aspect of fire.  I wrote and learned about this earlier in the year as I burnt remnants of a cluttered past.  I decided that at the traditional yearly "Turkey Party" that my husband and I host we should burn our Christmas tree in a metaphorical sacrifice and we each could adorn it with our own symbolic ornament to send off into the ether, transmuting its energy for a new designated use.  Letting go of the old to make way for the new.

Earlier this year my husband and I watched St. Joan, a 1957 British-American film about Joan of Arc listening to the voices in her head and following a calling she had inside of her. The movie was haunting.  I was moved by the idea of her heart not burning.  I was moved to tears during the burning scene and consumed with trying to envision what it was actually like for her to burn on that stake for what she believed in as her flesh was boiled off into the ether.  Death is the ultimate form of transmutation, changing the form of our life force, sending our energy out and into the cosmos.  I believe in the power of transmutation and the power of personal symbolism.  Once fire eats something, be it pine or be it flesh, it is gone.

This year, for me, has been one of healing.  A year of therapy, a year of medication, but one of letting go of old patterns and behaviors.  At the very least the year birthed the recognition of my need to change and it conceived a damn good attempt at getting myself moving forward.  The recognition that chronic depression, anxiety, and self doubt were holding me back from reaching my full potential in every single aspect of my life was a fire in itself that took off and slowly began to consume and transform the negative qualities of my psyche.  Learning to trust in and stop doubting my own voices, instincts, and feelings is becoming easier after receiving professional validation for such things.  To quote the Beatles, "I've got to admit it's getting better, a little better all the time..."

So, last night at Turkey Party after games and festivities the remainder of guests and us watched our woes burn away with our Christmas tree.  I cut out orange and red slips of construction paper and got out a trusted black Sharpie and we each wrote on the slips of paper what we wanted to surrender to the power of fire's purification and/or release.  Some had symbolic photos, some chose qualities or habits to write down.  I took an orange and a red strip of paper and assigned one to my Self Doubt.  On the other, in honor of my year of healing and the recognitions I have made, I surrendered "victim mentality/poor me/and all other sad ass excuses that keep me from reaching my full potential".  I think that about sums it up.  All of the energy we put into harboring negative thoughts and behaviors eats away at the precious time of our lives like a cancer.  If we transmuted that energy and used it for a better purpose we could transform our lives phenomenally. 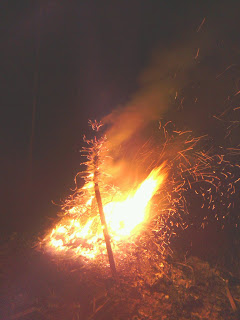 So we all gathered together in new tradition and watched as this year's Toast Master lit this years Christmas tree, decorated with our ornaments of transmutation, on fire.  It turns out negative energy burns like pine, fast and hot.  For a few momentous minutes, before us stood a pillar of fire as our woes and words burned off into the sparks that flew out toward the darkness of night sky.  The heat was intense, and I blinked away the tears.  It was magnificent.  The intensity was only momentary.  I thought about Joan of Arc dying this way, in pain as her flesh melted away.  Dying this way so we would remember that life is precious and no matter the consequences we should listen to our inner voice(s) and follow our calling.  Obstacles be damned; life is short.  All earthly things are transitory. Tradition is an important tribute to the constant in the chaos, almost as important as the symbolism we use.  The pillar of fire quickly turned into a tower of sparks and soon, from all of our worries, all that was left were the skeletal remains of our sacrificial tree.  I could still make out her silhouette by the hot glowing embers on the charred wooden lumbar of her spine.  We all stood in silence for a few glorious seconds lost in our own hopes, thoughts, and dreams until she finally fell over.  We had released the energies of 2013.  Would the symbolic burning of these things really be a catalyst for the changes that we crave?  This new year shall see.  Bring on 2014!!