A Whole New Year: Here's To Me

"And so this is Christmas and what have you done? Another year over, a new one just begun..."
To quote John Lennon, "what have you done?"  Have you made the most of this year?  Are you a better "you" than you were a year ago?  I was thinking about the state I was in a year ago and the state I find myself in now.  I can't believe that an entire year has flown by, but upon reflecting I can see the time and changes.  2013 saw some good stuff!  I started off in bad spirits, but this year has seen more personal growth in me than possibly any other.  Like the phoenix out of her ashes, I too have risen out of the pit I found myself in at the end of 2012.  Mind, Body, and Soul, I feel that I have come a long way in 2013.  I have gained insights and a new perspective through my experiences this year that I hope will help me to continue to progress as well in 2014. 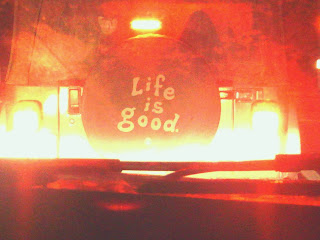 Last year I was too depressed to get a Christmas tree.  I simply didn't give a shit, about most things at the time, but especially for anything that seemed more of a pain than it was worth to me.  This year, even though I didn't decorate it and it was obtained in the easiest way possible, we actually had a tree.  I think that was a step in the right direction, even if the Christmas spirit was more so forced, it was there, nonetheless. And that was symbolic of my recovery, even if I feel I should perhaps be a little farther along on my journey after a year of therapy and medication, a lot of other things have happened this year that have shaped me.

1) I started therapy shortly after the first of the year in 2013. After how things went with Doc X I was so scared I would get a Bible thumping therapist who wouldn't 'get me'. One of the best things that happened was me being referred to my therapist, who I love. She, being an art therapist, understands my artistic mind, we have built up a good report, and this relationship has been key to the success of my progress in many areas of my life. With her I switched from Lexapro to Prozac for an SSRI to help with my seratonin levels and then started on Wellbutrin and discovered how wonderful dopamine can be.

2) I started taking piano lessons in March and it's amazing how I feel about it. It was sort of a symbolic make up for childhood thing that coincided with therapy. It was for my self worth, to feel that I am someone that deserves to and is worth piano lessons. I was entirely more nervous than you would think starting, especially considering a friend of mine is giving me the lessons. I think it's just because I want it so bad. This is something that I have wanted to do since I was an incredibly young child, so I had doubts about my ability to do it. I was scared I would flake out like I have with so many other things, the clarinet being one of them. I was determined though, and I am proud of my progress. I feel more natural at the piano than while playing any other instrument. I'm determined to stick with it. BEETHOVEN OR BUST!!!

3) Facebook actually made a wonderful connection this year and frankly I think it is the most wonderful thing to ever come from this social network's algorithms. It actually suggested my Musing Through account to my new friend Melissa, that's how we met. We both live locally so we met up and started jamming together in February and this has turned into a great friendship and partnership. She has saved my musical muscle from atrophy during my 'recovery time'. I quite possibly would have put down my guitar had it not been for her and I am forever grateful.

4) I reconnected with my friend Leslie after she got out of rehab and together, I think, we helped keep each other together. However different, we were both going through a metamorphosis of sorts and our friendship was a much needed salve that helped our wounds heal faster than they would have alone. It was a symbiotic union from the start.

5) While my sister was in from South Korea in July we went to see Old Crow Medicine Show at Penn's Peak in Jim Thorpe. It was my third time seeing OCMS and it may have been the best!!

6) In July we went on our first REAL family vacation. I made my first Outer Banks trip and I now understand why SO many people proudly sport the OBX stickers. I had an intimate moment with a rising sun.

7) Leslie and I made a road trip to New York City to take my sister to the JFK Airport. While there, we went to the city for a visit and checked out the New York Public Library and bought some fedoras on the street!

9) I saw FLEETWOOD MAC!!! I can now die happy and have personal proof why everyone who underestimates Lindsey Buckingham can suck it!!

10) I attended my first Oak Mountain Hideaway House Concert and saw the son of icons, Ben Taylor. Got to meet him, have him sign some stuff, talk of life, and play a song on his guitar in what I like to refer to as The Ben Taylor Experience!! SURREAL!!

11) I have experienced a great deal of Spiritual Development and have, I think, come to better terms with my place in the world and my Life Purpose.

12) I have also experienced a great deal of emotional and psychological healing, due to therapy, drugs, art and writing. It's been a good year for expression.

13) While bored in early summer we came up with the "Scale of Promiscuity" that rates people according to their sexual activity. It is entirely too thorough and descriptive, with a scale for each sex and a name for each spot on the Scale. The trick is to unabashedly place yourself on the Scale, which is more of a spectrum, perhaps. Why?? Because boredom loves stupid.

14) I attended the 10th Annual and my first Greenwood Furnace Folk Gathering with my friend Melissa. It was a super fun camping weekend of music workshops and performances. It was one of the coolest things I've attended!

15) I started writing like a mother fucker!!! After being blocked for months and wondering if I would still be compelled to create while on meds, I had a huge creative burst during the second half of the year. I began to experiment extensively with iambic pentameter and writing in form, including Odes and Sonnets. I've filled up my 3 subject Life Liver's Log in around 5 months. I'm collecting tablets to use for LLL's in the colors of the spectrum and I want to go through the chakras. I'm still on Red for the Root!

And so, what have I done? It seems like a lot, considering. I've made some good connections and progress. It was an eventful year and it was a pretty good one. I am incredibly blessed and I feel that now more than ever. I am in a much better place this time around. Hopefully this year I can continue moving forward toward where I want to be. Here's to moving forward. Happy New Year!

Email ThisBlogThis!Share to TwitterShare to FacebookShare to Pinterest
Labels: Anxiety, Depression, Gratitude, Holidays, Life, Personal Growth, Self Love, The Self