Fear Itself: Frets Over the B String

Every time I am tuning or changing strings on my guitar, I have flashbacks of that movie, is it the House on Haunted Hill remake or The Haunting, I can't remember which right now and I'm on my phone. Anyway, the girl is freaking out saying the spirits are in this and that all the while touching all of these things, then she says it's in THIS, and touches the piano or a harp? (Man, now I'm realizing how unfounded this fear is if I can't even remember the details of the scene.) Regardless, a string snaps at that moment and comes back and slashes her across the face. Bloody face skin laid open by musical instrument. Now, without the assistance of spirits, this kind of thing rarely happens while tuning up a guitar, but, hey, let's face it...it's possible. The anticipation is usually the most unnerving part though.
I was never fully afraid that the same fate would befall me, but I have always been a bit jumpy while working with my strings. Maybe I just understand you should respect things that are wound that tight and at such great tension? Luckily no mutilation has ever occurred while working with my guitar, though.
Last night my friend was on me to play some guitar so I picked up my Alvarez. It was fairly off, so I was tuning it up. Upon reaching the B string, I gave the tuning peg a slight turn and SNAP!! It violently came to its end, grazing my hand when it flew.
I was very surprised to see that it actually happened; not even a wound in the weakest of definitions but the string had in fact drew actual blood, a tiny tiny dot of glistening blood. Not enough for a meal or anything, but it was there. I'll be damned; it DOES happen.
It occurred to me how this is a metaphor for guitar play in itself or even life in general.  Like most fears, even if it DOES one day happen...the fear itself is much worse than the actual wound. The anticipation does much more damage than the event. Our fears are warranted, perhaps, but still ridiculous. Most things worried about never happen anyway, so you need to just brace yourself and tighten that string!! It could either draw blood or music out of you, but aren't they really one and the same?
"Do not die with your music still inside of you." - Wayne Dyer 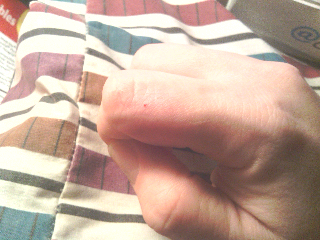