The Upside to Procrastination

PROcrastination.
As the dishes pile up.
I make a cheesecake.

This weekend Joey worked on Saturday, so I was bored and sad. At first, I was motivated and said, okay, that's fine, I'll do the dishes. Then I looked at the dishes and immediately decided I had much better things to do. This was Friday night. I was in good spirits and had the best intentions but then I got bummed out because it was Friday and he wasn't coming home, so instead of doing the dishes and cleaning up the destroyed (I mean, put off for days) kitchen, I would write a song. I sat at the counter, facing the mocking dishes, and instead penned and strummed out a song that actually made me fairly proud. So that was a Friday well spent, I'd say, even if my kitchen was a disaster. The first lesson in procrastination..sometimes, putting off doing the dirty work allows you to create something new. 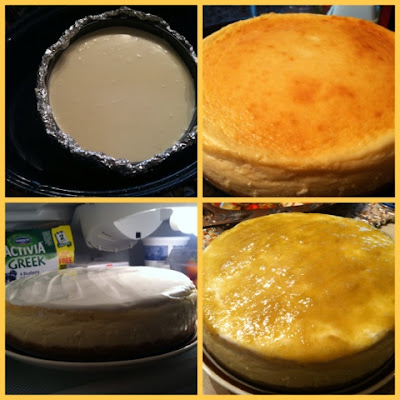 On Saturday, I thought about cleaning up the kitchen again but just wasn't in a cleaning shit up mood. I figured, since Joey's ETA wasn't until after 6, I would make my leap into cheesecakery. I finished up the song I wrote the night before and played around with it a bit, but then I started to bake, regardless of the state of my kitchen, which is something I'm not usually inclined to do. I usually prefer to have it cleaned up if I am doing any kind of fun baking and added mess making. I have never made a cheesecake from scratch before, but my mother had given me a 9" Wolfgang Puck springform pan as a gift this Christmas, because I had said about wanting to make one. So I finally got around to trying it out. This baby was from scratch. I mean, not from a box, but an honest to goodness cream cheese heavy whipping cream concoction of a for real cheesecake. My first!

I found a recipe on the internet. It is allegedly The Perfect Cheesecake, a twist on another woman's recipe posted by another woman. I didn't even look in my books and for some reason just searched the net and went with this one. It's a New York Style cheese cake, that actually required a water bath and everything and had a few steps. Leave it to me to go with a harder one, because I don't believe they all require a fancy pants bath and foil wrap? I also found out that our oven is incredibly uneven and needs leveled before I make my next cheesecake or a cake of any type for that matter. So, it's a little lopsided, but that doesn't affect the taste at all. It's still a beautiful thing.

This cheesecake actually called for a sour cream based topping spread on it, and then an optional fruit (raspberry) topping drizzled over it. I was at my mother's last week when she had been picking rhubarb out of their garden so I got some off of her to try out. Surely I should be able to make a fruit concoction for cheesecake from it? So I tried it out. My rhubarb topping wasn't exactly drizzlable, so I just spread it over top of the sour cream topping layer after I chilled that a bit. It worked. It ended up tasting quite sweet and yummy; rhubarb and cheesecake actually go together well. 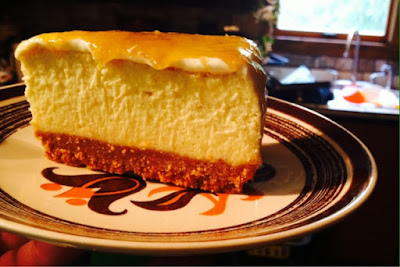 The cake, as a whole, was a success. The butter in the crust was perhaps a bit much, or the salt wasn't stirred into the crumbs enough, perhaps, and I would let the cream cheese come a little more to room temperature next time, but I'm still mmmmmcredibly pleased with the end result. We ate a bunch and gave a bunch away. The second lesson in procrastination...sometimes putting off the dirty work is pretty tasty! It's all about priorities. A dirty house doesn't need to be the end of your endeavors; you aren't putting things off if you are still doing something worthwhile. I got a song and a cheesecake out of the deal. There are so many better things to be doing than dishes!! So there. My first cheesecake, a rhubarb New York Style one, even. Delicious.