Joe VS. The Driveway 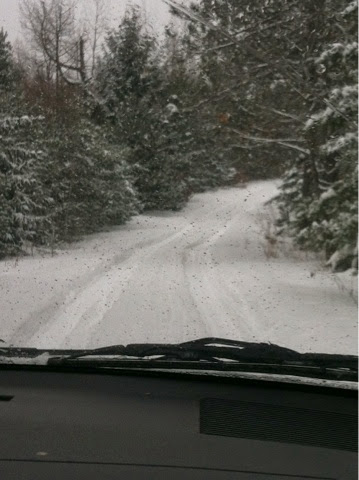 Today we had a bit of Joe Vs. The Driveway. My husband and I are lucky in that in MOST cases, it's usually only one of us that freaks out about a situation, and the other can still freak out, but to a lesser degree and try to help the other remain calm...or tell them what an idiot they are being. Regardless of the chosen roles or tactics, one of us is usually calm-ish...and one feels irate. This musing has to do with getting stuck part way up the driveway, 3/4 of the way, to be exact...and THAT is a metaphor!

My husband was driving, and I was in the passenger seat. If this was a dream, I would say that is a significant note. I don't know about in real life. (No, really---I don't know about it.) During this particular incident, I was actually the calm one, which I love, because it honestly doesn't happen as often. I usually am the one dealing with the unstable mood or explosions of emotion, and will occasionally need to calm my husband down here and there when he does the same. So, needless to say, I feel awesome when I'm on the other end...like I'm a god damn Zen master or some shit. I revel in it...just a tad...because it's a good lesson. And, as synchronicity would allow, it usually has something to do with what I am personally working on in my inner world at the time. (Go figure!) And explaining or teaching, seeing something from the other seat, as it were, is one of the best ways to LEARN what it is you are teaching. So not only because I don't feel like the idiot, but because I get a chance to SEE how I should be reacting all of the time. I get a chance to see my reactions mirrored...and see how futile they are. How self-sabotaging, how pointless. Preach it, sister! Preach it! It's amusing to me, although, it is a humble sermon, because I am too often in the driver seat...literally. I am the one stuck in the driveway and not the one just watching the drama unfold. Sometimes you lose sight of that.

So my husband was getting angry as we were going up the driveway and backing down again and again trying to get past where we were. Meanwhile, the snow was just continuing to come down, not making it any better. But we had full bellies, we were in our own driveway and we were together. This is what I told my husband. No big deal. We'll get 'er! We were 3/4 of the way up the driveway...and a day later I would realize how odd it was that our driveway is shaped exactly like the arc my therapist made with her hand when she was describing how I was doing progress wise, and we got stuck in the exact spot she stopped her hand in the air and declared that I was at...3/4 of the way...riiiiiiiiight near the top of the LAST little hump before you're home free...where you keep sliding off track! Hmm...interesting. Where you are tested with what you have learned thus far. You can't make it up smoothly without knowing what you've learned. Do I digress?

In all actuality, I just had the car stuck in our driveway a week prior on my way back home from my friend's house one night. (It was a BAD winter for our driveway!) Luckily, I had a little wine in me, so the cold wasn't bad at all and it turned into a beautiful moonlit walk, as Sam Cooke serenaded me via Pandora the entire length of my trek. "Darling, you send me...Honest, you do, honest, you do..." It was actually rather enjoyable, as I sneaked up to my snow covered abode like it was a hidden cabin in the woods. Which takes me back to us being stuck in the driveway. It's no big deal...it is what you make it. I had decided to walk and listened to Sam Cooke! It was enjoyable. It could have been made into an ordeal. I could have become so pissed that I tried to kick my tire, slipped, and fell on my ass! I could have broken my coccyx! It COULD have happened. But I CHOSE to enjoy the moment. This is what I was thinking about when we became stuck after our outing for breakfast that morning.

In my husband's defense, though, he was the one in charge of unstucking the car both times, so I am sure that is why he wasn't enjoying the moment as much as I was. I didn't see much amusement in his eyes when I replied to one of his outbursts with, "I"m having a really good time!" and a large grin. Maybe now wasn't the time? But if not Now, when? Now is exactly when you need to have a good time! Even when you are stuck 3/4 of the way up your driveway...because you're almost home. No matter how much you keep sliding into that deep drift, no matter how long it takes you to pull yourself out...no matter how many times you have to back down the drive and get a head start back up...you're gonna make it home...even if you have to walk. That's a metaphor...and a good life lesson.