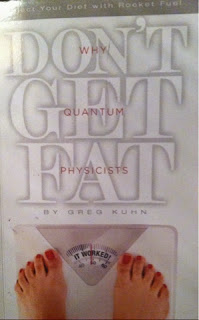 This was a different read. It was an interesting take on diet and unwanted weight from a quantum physics perspective. I found it interesting, while being also a little absurd. All in all, though, still an interesting and informative read. It describes how our belief systems are what essentially manifest things into existence, through our thoughts and emotions. How we feel about what we eat or do not eat or how we move our bodies, according to Kuhn, is what will determine the outcome.

The author first explains the difference between classical physics and quantum physics. He describes the first scientific revolution as the action-based paradigm and says the rules for most diets you were taught come from this paradigm. He suggests you shift your paradigms and embrace the laws of quantum physics, which are the energy-based paradigm and the holistic paradigm. Our bodies aren't machines, but rather a group of complex systems that are greater than the sum of their parts.

A lot of this is Law of Attraction stuff, which if you think about it, is quantum physics, but most of this book deals with your thoughts and feelings. The author talks about the "stories" that we tell ourselves about things. Nothing in and of itself is ever "bad", per se, it is the story that we tell ourselves about the event that determines how we perceive it. Basically, in an energy-based paradigm, what we give off is what we take in, so if we feel fat we will, essentially, become fat. If we think and tell ourselves food is going to make us gain weight, then it most likely will.

One of the most interesting things in this book was when the author cited the work of Dr. Candice Pert, who discovered evidence in the 1990's that our bodies are really a unified whole. She found that are thoughts really are physical things in that they each have a unique neuropeptide associated with them and each time we have a thought or emotion, our brains produce these neuropeptides and our blood stream is flooded with them. These neuropeptides are then assimilated by your body's cells, inserting themselves into special receptors on the cell's membrane, essentially being absorbed into the cells of your body. Overtime, your cells begin to crave the neuropeptides that they are most often exposed to. So your cells actually start telling your brain to produce these thoughts or emotions, and we essentially become addicted to certain ways of thinking or emotional states. This explains why changing your way of thinking can be one of the most difficult endeavors there is.

The author's solution is basically to change your way of thinking and feeling by changing the stories that you tell yourself. As in LOA systems, he suggests feeling the state of success before it has arrived and by the laws of physics, through the quantum field, you will draw it to you. He highlights the importance of gratitude and meditation. It is thought provoking, having these concepts applied to eating and exercise, but it does make sense, I'll give him that. It isn't magic, but if you change the way you perceive things, you could potentially have better results from more assistance from the quantum field. It's really one of those easier said than done deals. Change your mind, change your life.
Posted By MISSIE SUE at 7:55 PM