April Showers and the Death of Ego

I can't believe April is half over already.  Time is flying and I feel as though I'm in slow motion.  Maybe it's just the Cabin Fever leaving my body via the colon??  We find relief in the warm weather allowing outside play and the stress relief it brings, but it has been raining this week and today it snowed.  I have been letting the dirt build up while reading.

I'm day by day working my way through Sarah Ban Breathnach's Simple Abundance: A Daybook of Comfort and Joy.  I've got all year for that one, but I also am working on Eckhart Tolle's A New Earth.  I bought this book years ago along with The Power of Now, which I read, although I never made it onto A New Earth.  I watch Super Soul Sunday on OWN mostly every week, and Oprah is now reairing her discussions with Eckhart Tolle week by week, chapter by chapter.  I thought it an opportune time to finally read the book!  So I am enjoying that.  It's like being in a book club.  Being able to watch Eckhart discuss each chapter as I go is insightful and I've been learning a lot about the Ego and its desire to thrive.  Interestingly enough, Ego has been a running theme as of late.

Ego is the culprit.  The Ego and its thriving pain body.  The victim mentality that I swore to give up as I burnt it away on a slip of paper on our Christmas tree after Turkey Party---it's rooted in Ego.  Having a big ego doesn't always mean you feel superior to people.  If you feel inferior, that is still your ego.  It thrives on pain, negative emotions and thoughts.  It's an invisible force in control of most human interactions, and therein lies the problem.

We found a dead bird on the patio two Sunday's ago and I thought, 'What a terrible omen!'  After looking up its symbolism for shits and giggles, I found it doesn't have to be.  It can represent the death of a person, but also the death of a relationship or even a belief...a way of thinking.  On that Super Soul Sunday, especially after taking in the happenings that evening brought, I decided the dead bird, that poor creature that dove head first into my patio table, to me....was indeed the death of Ego.  Here's to the shift. 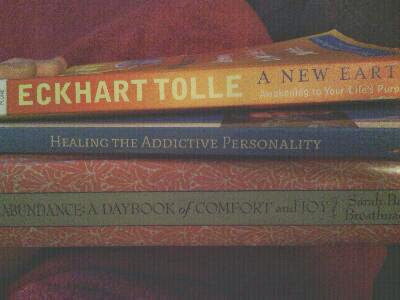 Email ThisBlogThis!Share to TwitterShare to FacebookShare to Pinterest
Labels: Books, Depression, Life, The Self