What the Fuck is My Problem?

What the fuck is your problem??! What the fuck is MY problem?! Sometimes...just sometimes...it's you. Sometimes, it's not you, it's me, but sometimes it's not me---it's YOU! If this is at all confusing, welcome to my world. I'm confused a majority of the time. I'm gonna open up a bag of worms...a Pandora's box...a bunch of shit? You're welcome to think so, but I don't really care. I've long suspected there was something not completely "normal" about the way I processed sensory information and emotions, but I began to get a better grip on what was up when I started referring to myself as an empath. There's a lot to be said about owning something. I got an even better hold on things once I finally believed it was true.

An empath is a person who, essentially, feels the emotions and physical sensations of those they are close to, around a lot or sometimes just walking past or sitting near. Usually it is with people you have strong emotional connections with. Sometimes it seems there is no rhyme or reason. Some things are stronger than others. Sorting and sifting through your own feelings and emotions is a process, but the best way to help you to identify what you are catching. Empaths who are just discovering they are empaths are actually, in my studies and experience, stuck on identifying. They identify with everything they feel. This is a good thing, to be able to put yourself in a different perspective, in somebody else's shoes, but it's important to know where you end and something else begins...while also knowing that it is an illusion that it even is separate in the first place. Yeah, life is complex, filled with dichotomies and reflections.

It's confusing that you are ultimately seeing reflections of yourself in other people and figuring out if you are projecting or seeing truthfully can be difficult. Knowing yourself is really key to differentiating between your own parts and emotions and the other's. I noticed that certain people I naturally had a "wall" up in front of to protect me, but it left me numb myself at times. I grew adept at not feeling my own feelings and running off of the direction of others. I naturally shielded some people but at the same time had absolutely no boundaries against other people's energy. It's taken me a long time to put the pieces of my story together; I've always been a container for the unwanted energies of others. I hold it together for other people, but can't seem to hold my own. Cleansing, shielding, and grounding can be very helpful in dealing with energies and they have been very beneficial. It's not always on. It ebbs and flows, or wanes and peaks. Somethings are overwhelming and some things are fine. You just never know.

I experienced a lot of healing when I started using Dr. Judith Orloff's Empath Support Group and realized what was happening, but I also have since moved on somewhat because I don't want to get overly involved in over identifying with them. Basically, an empath is a highly sensitive person that can tap into the emotions of other people and experience those feelings as if they were their own. Believe me...it's a thing. So, that's what my problem is, after all. I'm just too damn sensitive, but I've learned there really is no such thing. It's helpful. I'm an artist. I'm a sensitive singer-songwriter. It's a blessing and a curse. That and I'm an introvert, basically. Or, at the very least, an ambivert. So, I like to socialize, but not really. I recharge with alone time. I like nature. I love being alone. I am drained by people and social situations. I enjoy small, more intimate groups of people as apposed to large and loud crowds. I used to be a lot worse and relied on alcohol to numb my sensory overload but I have more of a grip on it now. I'm growing daily and mastering my "skills" the best that I can. I need time away because I absorb everything like a sponge and I feel for you. I really do. 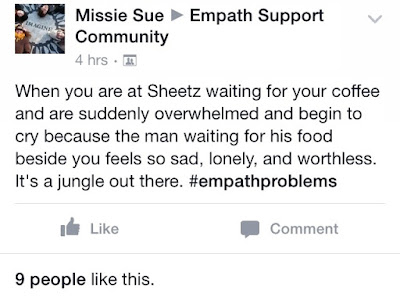